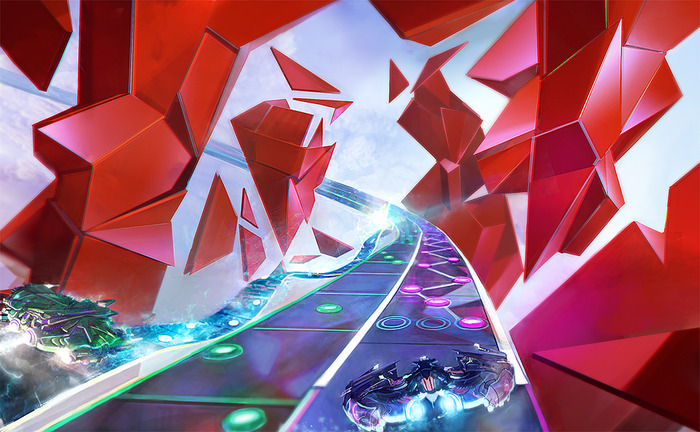 Long before rhythm games used plastic instruments and dancing for Microsoft’s Kinect, Harmonix created the musical PS2 classic, Amplitude. With the help of dedicated fans, Harmonix hopes to bring Amplitude into next-gen territory, as a Kickstarter is currently underway for a Sony-exclusive remake.

Amplitude released as a PS2-exclusive title back in 2003. This revolutionary rhythm/action game featured controlling a vehicle along a series of tracks- each one representing an individual audio track in a song- while trying to hit notes in-time. Amplitude‘s influence can be seen in Rez, and the Indie PC title Audiosurf. Earlier this month, Harmonix launched a Kickstarter campaign with the hopeful intent of creating an updated, pseudo-remake of Amplitude for the PS3 and PS4. If funded, the new Amplitude will be more of “an HD re-envisioning of the cult classic, smartly updated for today on every axis“.

The new version uses Harmonix’s “proprietary engine” for matching notes and inputs with each audio track; the same engine used for Rock Band, this allows for notes to land exactly in-line with the backing track. While 11 years separate the PS2 version and the Kickstarter project, several of Amplitude‘s original developers and audio engineers are still within Harmonix, and will be contributing to the new Amplitude.

By donating a minimum of $20, fans can secure a download code for the game upon release, along with having their name featured in the Credits. Higher pledge tiers include a retro-themed PS2 case ($100), an Amplitude “Backer” T-shirt ($125), and dinner with Tim Schafer ($3,501+).