Blade Symphony is a new sword-based tactical combat game currently available on Steam, but how does its fare against the competition?

Blade Symphony is a multi-player-only action title from Indie developer Puny Human Games. Players are treated to a unique blend of futuristic character design, paired with medieval and feudal weaponry. While some Fighters and arena-combat titles have some leniency in regards to attack-inputs, the combat system in Blade Symphony requires strategic thinking, and mastery of the character and weapon of choice. Much like the PC-exclusive medieval combat game Chivalry: Medieval Warfare, attacks in Blade Symphony are all direction-based. Each character is capable of performing an overhead strike, a thrust, and two horizontal slashes from either side. Depending on which character-and-weapon combination the player chooses, available combat abilities will be altered.

In the current build, four characters are available to the player; each character has his or her own unique abilities in regards to attack strength, attack type, mobility, weapon proficiency and mobility. The character “Pure” for example, has stronger aerial attacks, and a higher chance of connecting multi-hit strikes with her opponents. Several weapons and variants can be used on the battlefield; katanas, rapiers, long-swords and scimitars can be equipped for every character, though each comes with their own special traits. Depending on the weapon of choice, the player can be granted with damage perks for ground or aerial-based attacks, enhanced defense and quicker parries, or have the option of performing unblockable attacks. Diving deeper into the combat system reveals several defensive mechanics that each character possesses. Every character in Blade Symphony is capable of evading strikes with a quick dash; a roll is available for creating more distance, or for a quick rush-in for a follow-up strike. Players are able to wall-run for a brief period of time; the ability opens up mobility options for getting out of situations involving “cornering”, and can be used to give the player a terrain advantage in multi-tiered environments. Depending on which weapon is currently equipped, players can either perform a stationary block, enter a mobile guard stance, parry attacks, or perform feign/cancel moves. Needless to say, Blade Symphony is a challenging experience, one that requires a significant amount of dedication in order to master the techniques and characters.

Along with a robust Training Mode, Blade Symphony offers servers for both “FFA – Free For All” and “Duel” modes. In Duel servers, a series of internal lobbies are available for players to join, each one with its own arena. Players who join are then added to a rotating queue, as they will participate in a “King of the Hill” style one-on-one match with the current winner. Blade Symphony features a different variation of FFA, in that arenas exist as more of a matchmaking lobby, as compared to an all-out battle area. All connected players are thrown into a massive, multi-tiered environment, without any “stage restrictions” or boundaries. While players have the ability to run around the stage, attacking others at will, two players can send and receive “Duel” invites to each other. Once a Duel has been accepted, all other players in the server become “phantoms”- or silohuettes- within the stage, leaving just the two dueling players locked in a private match. Adversely, other players can see those who are currently dueling, however they cannot interfere with a private match-in-progress. Those who want to test their team-based combat prowess, Blade Symphony also offers a 2v2 mode.

Blade Symphony features a very unique blend of futuristic, feudal and medieval influences. Each of the available characters, aside from the android “Pure”, features a modernized futuristic take on a classic wardrobe, such as a full suit of armor, or a professional fencer’s garb. Each environment is a huge, multi-tiered arena to explore, complete with both indoor and outdoor areas, and occasionally destructible elements. Arenas are varied, including a pristine mall, a courtyard influenced by Gothic architecture, and a Japanese garden based on the feudal era. The soundtrack is a fantastic array of electronic and orchestral arrangements, reflecting on the timeline-bending variety of environments and characters. With softer trance themes and intense dark tracks, Blade Symphony’s soundtrack reflects both the ferocity and elegance of a sword-based duel. 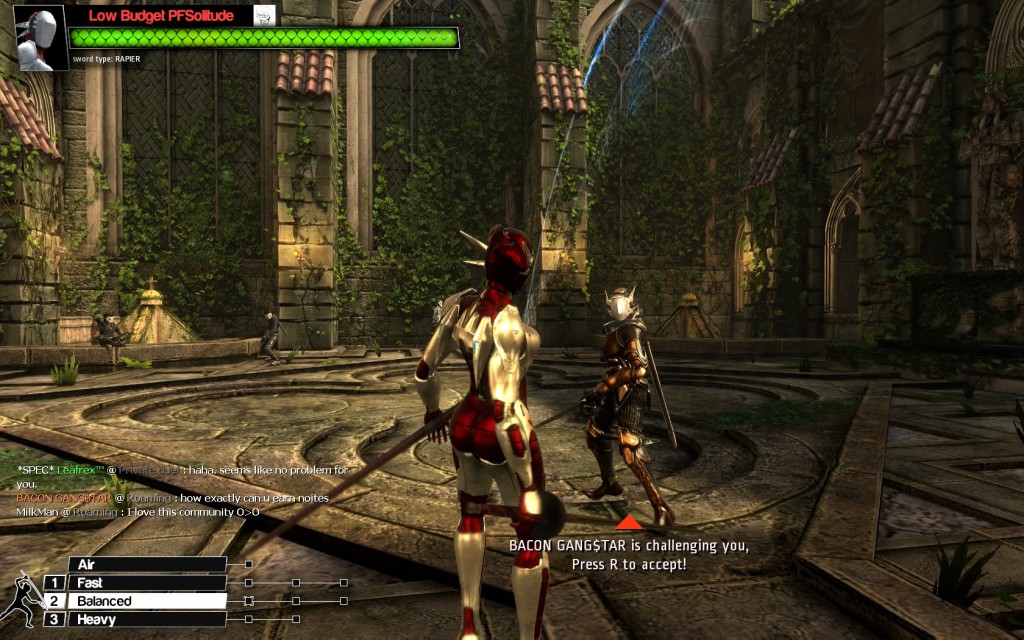 While it may not be kind to new players, Blade Symphony is a fantastic multi-player title. With each character having his or her own unique combat style, paired with a massive arsenal of weapons equipped with their own individual perks, the PC-exclusive title takes a significant amount of dedication in order to master. For those who are willing to set aside the time and patience, Blade Symphony is a beautiful sword-fighting game that pushes tactical and lateral-thinking abilities to their limits.