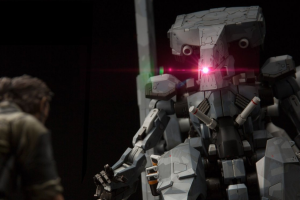 Making its imposing debut in Metal Gear Solid V: The Phantom Pain, the first bi-pedal Metal Gear will be a collectible figure next year

Hideo Kojima’s award-winning Metal Gear saga comes to a close, with the astounding climax that is Metal Gear Solid V: The Phantom Pain.

The ongoing bitter circus involving Hideo Kojima, Kojima Productions and Konami enters its next phase, as it seems all emblems of the development team have been removed from the cover of The Phantom Pain.

Despite statements from Metal Gear franchise publisher Konami, the Japanese voice actor for Solid Snake recently stated that Kojima Productions has been disbanded.

To the complete dismay of Silent Hill fans, the next-gen debut of the classic horror franchise has been officially cancelled.

Silent Hills appears to be the next casualty of the Kojima Productions and Konami fallout, as Guillermo Del Toro and Norman Reedus have both confirmed their involvement is no more.