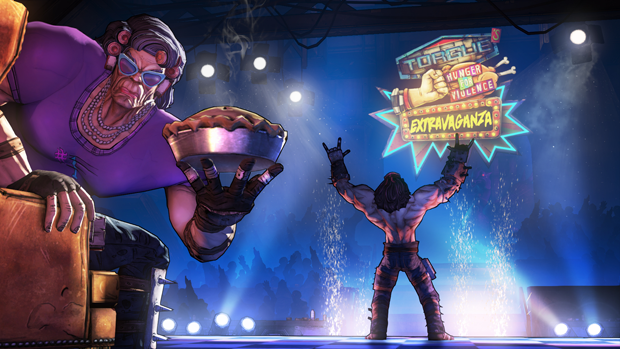 Celebrate Thanksgiving with a turkey-hunt of a different kind in the next Borderlands 2 Headhunter DLC.

The ever-expanding world of Pandora will receive yet another add-on with “The Horrible Hunger of the Ravenous Wattle Gobbler”, coming next Tuesday. This will be the 2nd of three planned Headhunter DLC packs, the first being “T.K. Baha’s Bloody Harvest”; each Headhunter pack involves a fairly short queue of missions before tackling a boss…in this case, a giant turkey. Continuing with the “holiday” themes, Wattle Gobbler has a Thanksgiving influence which involves food, cooking and family: Torgue Corporation and its bombastic spokesperson Mr. Torgue are hosting a reality-competition to kill the Wattle Gobbler- an invincible turkey of massive proportions, that can only be subdued by a “last meal” cooked by the Vault Hunters:

“The Horrible Hunger of the Ravenous Wattle Gobbler” releases for 360, PS3 and PC on Nov. 26 for $2.99; the final Headhunter DLC- “How Marcus Saved Mercenary Day”- is expected to release sometime in December.