Watch Dogs was one of the most anticipated titles of 2013…As luck would have it, Ubisoft’s new IP would face a content-based release delay, pushing the title into 2014. Now that the wait is over, does Watch Dogs hold a candle to its original hype?

Watch Dogs (also seen with an underscore- “Watch_Dogs”) is the latest IP from Rayman and Assassin’s Creed developer and publisher Ubisoft. Originally scheduled to release in November 2013, the techno-drama was delayed into 2014, due to content additions and graphical changes. While Watch Dogs has finally seen the light of day for PCs, Sony and Microsoft consoles, the promised Wii U version will arrive later this year.

Watch Dogs wants its audience to believe that all of Chicago’s technology is in their hands; with the power of “big brother” in the player’s hands, Chicago is a both the ultimate weapon, and security measure. Players take hold of Aiden Pierce, a hacker-for-hire whose previous actions lead to a personal bounty, and the untimely death of his niece. While Aiden initially vows to never use his hacking abilities again, vengeance leads him back into the technological underground, seeking the identity of his niece’s murderer. Over the course of 15-20 hours worth of story missions, Pierce will hack and infiltrate his way through Chicago, while exacting his own skewed form of justice upon Chicago’s criminal organizations.

While Aiden is bent on preventing crime, many of his actions are of questionable morality; after the dust settles, players will wonder if Aiden really should be considered the “hero” of the story. While many of Aiden’s deeds are carried out for the sake of justice, his methods may not be as sound. Pierce will often switch from a protective savior-figure, to an emotionless mechanical assassin between missions. Outside of the story missions, Pierce can either be viewed as a criminal or vigilante by the public; certain actions will fill one of two gauges, acting as the “Reputation” meter in Watch Dogs. By solving or preventing various crimes across Chicago, the community will see Pierce as a “vigilante”; citizens will be less likely to send police in his direction. Those who send Aiden on a killing-spree however, will be labeled by Chicago’s media as a “criminal” or even a “terrorist”. The reputation meter has no effect on the outcome of the plot- only the perception of Aiden himself.

As Pierce’s antics bring him deeper into organized crime, he’ll befriend others to aide him in his search for his sister, including the likes of a well-resourced assassin, a DedSec member, gang members, and the creator of ctOS himself. Where Aiden can often appear irrational and self-contradictory at times, the supporting NPCs (non-playable characters) have concrete personalities. While some of their motives are unclear, the supporting cast of Watch Dogs is full of personality- a much needed contrast against the protagonist. 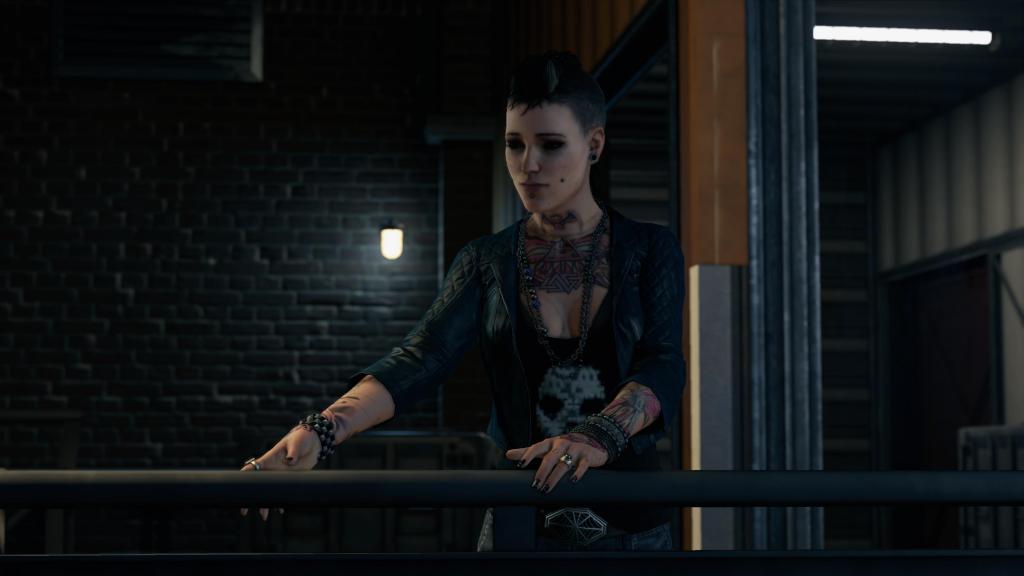 Chicago is completely available to explore from the moment Watch Dogs begins. While it’s not as fluid or robust of the Assassin’s Creed series, Aiden Pierce can perform light parkour, as he can scale some fences, “corner jump” to reach ledges, and can volley over short obstacles. A game with such a heavy emphasis on hacking into electronics would need a fairly user-friendly scheme…Watch Dogs simplifies hacking down to a single button. (Note: This run-through was completed using a 360 controller). By tapping the X-button, Aiden can scan the immediate environment with the “Profiler” app on his phone. With the Profiler active, the player can see various information about the surrounding individuals and interactable items. If a prompt is available, players can hack into a person’s phone, ctOS-enabled, or standard electronic device by holding down the X-button. From here, Aiden can read text-message conversations, ease-drop on phone calls, launder money from bank accounts, overload electrical breakers, and expand his vision by hop-scotching through security cameras. Some of Chicago’s citizens carry music and car data on their phones; hacking these individuals unlocks more in-game music, and adds more cars to the vehicle-delivery mechanic. Apart from the standard hacking functions, Aiden’s phone acts as a central hub for optional missions, and for tracking game progression. After breaking into a few cars, players can then have them delivered close to their current location by using the “Vehicle On Demand” service within Pierce’s phone. Extra vehicles and their variants can also be purchased through the VOD app. Not only can players order vehicles, check on game-progression and character upgrades, but several other in-game events can be triggered from Aiden’s phone. For experience-boosting distractions, players can embark on psychadelic adventures in “Digital Trips”. These range from escape cyborgs, to bouncing across giant flowers, to wreaking havoc as a giant mechanical spider. “Cash Run” will test the player’s parkour abilities, as he/she must race across the city, while collecting dropped cash in various places. Player’s can also wage war against low-polygon “retro-esque” aliens, in the augmented-reality game “NVZN”.

Though Watch Dogs has a strong emphasis on having technology and environmental hazards at the player’s disposal, Aiden Pierce is surprisingly capable when it comes to wielding guns. An open shoot-out may not be the best way of going about certain missions, but if the situation arrives, players will find that the shooting mechanics are very well-designed. For tense situations, Aiden also has the ability to “focus”, temporarily slowing time down to a crawl. Vehicles have a surprising amount of “weight” to them. With the exceptions being motorcycles and dirt-bikes, the array of cars and trucks offered in Watch Dogs all have heavy steering; it’s a bizarre contrast to games like GTA V and Saints Row IV, but it adds a sense of realism when navigating Chicago’s congested streets. Players can power-slide around turns by tapping the B-button; when parked, pressing B turns the vehicle off, allowing for Aiden to hide in the car. This is best used when surveying a gang territory, or when invading another player’s game; Aiden can hide from pursuing enemies, but there’s a very high chance that gang members and police will simply walk right up to the vehicle and open fire.

Keeping with the “Everything is Connected” tagline, Watch Dogs features an optional online mode which allows players to invade other games. At any time- except when a mission is in-progress, another player can secretly drop into a game, and begin hacking the host player. The hosted player has a specific amount of time to track down and kill the hacker by using whatever means necessary. By incapacitating enemy hackers- or “Fixers”- players gain “Notoriety Points”. These points are separate from the standard experience system, and can only be obtained by completing online modes. Those who want to experience Watch Dogs without having to bother with player-invasions can turn off online features under the “Options” menu. Other online modes include “Decryption” where two opposing teams try to hack a terminal before the other, “Free Roam”, and “ctOS Mobile Challenge”. Those who have the Watch Dogs “ctOS” app installed on a smartphone or tablet, have the ability to create city-based challenges and races; ctOS users can then have console and PC users participate in those custom challenges. Watch Dogs also features an “Online Race” mode, but it generally results in chaos, due to the sluggish nature of the provided cars.

The gaming community received its first taste of Watch Dogs back at E3 2012. The gameplay debut trailer featured stunning visuals depicting a modern-day, techno-centric Chicago, IL. Viewers watched intently as protagonist Aiden Pierce hacked and manipulated his way through a club and onto the damp streets of the city, where the trailer concluded with a frantic shootout in an intersection. One year later, fans were given another gameplay trailer at E3 2013. While many of the core gameplay mechanics remained intact, the new trailer featured slightly “less intense” graphics. While not as extreme as the backlash towards Aliens: Colonial Marines, many fans took to online outlets, expressing concerns over the possibility that the entire game may have received a downgrade.

While it may not have the same visual impact as the initial E3 reveal, Watch Dogs is a fantastic spectacle to behold. Digital Chicago is very taxing on the hardware; only those with high-end “enthusiast” level PCs may get to experience Watch Dogs at its maximum graphical potential. Powered by the NVidia GameWorks suite, Chicago offers plenty of realistic, dynamic lighting and shading. Raindrops can be seen bouncing off the environment, and leaving tiny ripples in puddles and rivers. While many titles use visual trickery with textures to emulate reflections, all of the reflections found in Watch Dogs are generated in real-time. This is best seen during rainy sequences, as headlights, buildings, and even pedestrians are reflected in the wet pavement. With the settings turned down, Watch Dogs is still one of the more stunning titles to look at from this year, but minor problems begin to show, such as the borders between textures on character-models.

Watch Dogs may not feature a robust track-list, but the song selections do their part to reflect the atmosphere. Ranging between rap and R&B, punk rock, and blues, the playlist found within Watch Dogs reflects the blue-collar, rebellious, and crime-laden areas and citizens of Chicago. The sidewalks, back alleys and “hot-spots” are bustling with life; everyone on the street has something to say, or something to show. Some citizens are engaged in meaningful conversation, others discuss the ethics of ctOS, and some even put on street-side talent shows.

Watch Dogs is a fantastic experience, and a wonderful take on the open-world sandbox genre of games. However, it’s marred by a protagonist with an unclear, contradictory mindset. While the plot can be summarized as a basic tale of revenge, it loses steam very early on in the game, and gets pushed aside for other tasks given by various NPCs. The online modes work seamlessly (internet connection pending), and the assortment of other nonsensical modes are a welcome addition to the game, but the sheer amount of extra content is borderline overwhelming. Watch Dogs is an exceptional new IP, and a possible franchise-starter, but it falls just short of the masterpiece that was originally promised.