Hatred is the ultra-violent child of Indie studio Destructive Creations. While the PC-exclusive title will challenge even the best of top-down-shooter veterans, there’s not much substance to be found outside of the already questionable themes at hand.

Hatred‘s initial reveal came during last year’s wave of political attacks against the gaming industry for its supposed promotion of real-world violence and aggressive behavior. Long before its launch, Hatred was targeted for its relentless, unsettling scenes of violence against defenseless civilians. One of the more recent titles to receive the rare “AO-Adults Only” rating, Hatred is only the second title to receive the ESRB rating strictly due to its violent content, following the 2007 initial rating of Manhunt 2 before it was reworked to fit the “M-Mature” classification. The title was briefly pulled from Steam Greenlight, but was since restored to Valve’s online gaming service. Hatred is the only AO-rated game to release on Steam.

The plot revolves around “The Crusader”, a pure misanthrope bent on erasing humanity’s existence. Armed with an AK-47, handgun, shotgun and a handful of grenades, he begins his “genocide crusade” by killing unarmed civilians in a neighborhood outside New York City. The surviving members of the community are evacuated from their homes and nearby establishments, and are given refuge within a police station. The Crusader takes out his vengeance on the officers; the surviving “human shields” are all murdered as The Crusader arms himself with police equipment and flees into the sewers. An army of SWAT teams chase after him, only to land in a close-quarters ambush, resulting in the same fate as all those who’ve previously encountered The Crusader. Following the harrowing encounter beneath the streets of New York, the protagonist hijacks a train, relentlessly slaughtering everyone on board. As The Crusader’s murder-train heads for the Chinatown district, he learns of a nuclear power plant in New Jersey. The Crusader believes that he can destroy the city by overloading the reactor, thus satisfying his hunger for murder. 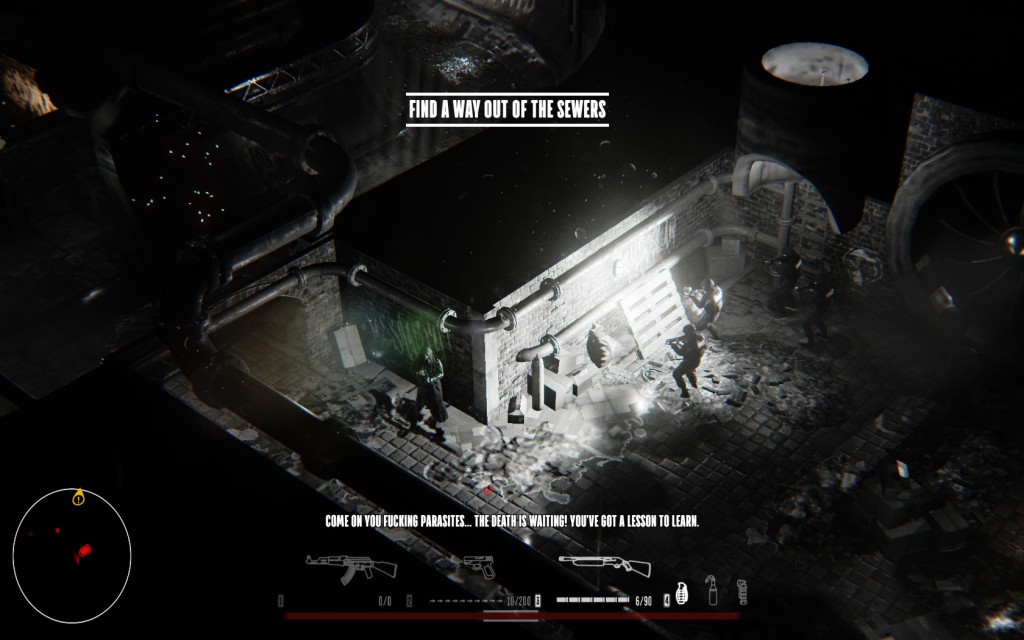 It may not come as a surprise given the subject material, but there isn’t much substance behind Hatred‘s story. The player traverses between multiple areas, killing enough civilians to alert the local law enforcement; the player then carries out his or her genocide crusade upon the police, SWAT, or in later stages, military forces. The Crusader has very little depth or emotional complexity to his character; he hates people, and will kill anyone that stands remotely close to his path.

Hatred is a top-down isometric shooter, reminiscent of titles such as Dead Island: Epidemic, Dead Nation and the upcoming Bombshell. Players control The Crusader in vast free-roam areas with the keyboard, while using the mouse to aim freely at anything on the screen. While the game does support controllers, menus still require a mouse and keyboard for navigation. The Crusader begins with a standard loadout of weapons, each of which can be swapped with firearms either in the environment or dropped by law enforcement.

For a game that requires the player to kill as many people as possible, ammunition is bizarrely scarce; ammo is randomly stored within some houses, stores and other indoor establishments. Health can only be restored by performing an” Execution” on a fallen civilian; by pressing the respective button (“Q” on the keyboard), a short cutscene will play with The Crusader brutally murdering the wounded civilian. Execution sequences are in-engine and cannot be skipped, however Hatred gives players the option of disabling the feature.

Stage progression is often locked until the player fulfills some kind of quota; the player needs to kill a specific amount of civilians and cops in order to progress. Aside from the standard run-and-shoot method, players can get moderately creative with their methods of killing, as most buildings house propane tanks that will kill anyone within a certain radius, and damage the surrounding property. In some cases, propane tanks can be set off in a chain reaction, resulting in destroyed garages, vehicles, or an entire wing of a house. If the player is having difficulties meeting the kill-count for each stage, side missions can be found by exploring each environment. Early side activities include breaking into a house-party and killing everyone inside, storming a shopping center, and opening fire upon a funeral procession. Vehicles can also be driven around town, or through hapless civilians, though their handling is at best clunky. Several cars and story-based vehicles have very slow acceleration with a laughably high top-speed; the incredibly heavy steering can turn navigating some areas into an absolute nightmare.

Hatred‘s core revolves around killing defenseless innocents, however that shouldn’t fool potential players into thinking this is an easy game. Depending on how each stage is approached, the player may find himself/herself in the unsavory position of being surrounded by police officers. He may be a self-proclaimed “one man army”, but The Crusader is prone to easy, untimely deaths if the player isn’t fully aware of his or her surroundings. Once an alert has been raised, police can emerge from nearly anywhere; unchecked civilians may even fight back, picking up firearms of their own to dish out some well-deserved revenge.

Destructive Creations opted to use a monochromatic color scheme for Hatred as a way to reflect the dark nature of the title. While the black-and-grey visuals do an excellent job of conveying the relentless anger and wrath of The Crusader’s actions, it takes away from the core gameplay experience. Hatred‘s stages already have several blind spots behind trees or buildings, or in overgrown grass and shrubbery. Lighting is often only provided by streetlights, surrounding buildings or police officers with flashlights- this results in many poorly lit, wide-open areas. With the desaturated color scheme, film-grain effect, and environments set at night, it’s very difficult to actually see key elements in the game- players are ultimately left with a muddy experience.

Hatred should be commended for taking a jab at politically-charged trends within the gaming industry, but for a game that was designed to be intentionally controversial, it tends to come off as immature- almost vulgarly slapstick. Those who are willing to peel back Hatred‘s subject matter will find a solid top-down shooter, however the title is far from polished, with muddy visuals and a shallow story that does very little to motivate the player towards overall completion.