After 30 long months, Breath of the Wild finally hits stores on the Nintendo Switch launch day.

After two years of constant footage and a handful of delays, The Legend of Zelda: Breath of the Wild made its presumably final pre-launch appearance as the stinger on Nintendo’s Nintendo Switch presentation late Thursday night/early Friday morning [depending on the region]. Fans were shown an incredible new trailer, complete with voice acting- a first for the core Zelda series- and hints of the lore and placement in the convoluted timeline from dialogue presented by the Great Deku Tree; for timeline theorists scratching their heads, this confirms Breath of the Wild‘s direct link to either Ocarina of Time or The Wind Waker.

A string of almost painful teases from Reggie Fils-Aime, Shigeru Miyamoto and Eiji Aonuma finally led to the official release date for Breath of the Wild- March 3rd, the official launch date for the Nintendo Switch. It should be noted however that depending on where Zelda fans look, the date may or may not apply to both versions; the official trailer shows the release date followed by the Switch and Wii U logos, but retailers still list the Wii U version has having a tentative 3/31/2017 release date.

Pre-orders opened up for the Nintendo Switch shortly after the presentation, along with two special edition versions of The Legend of Zelda: Breath of the Wild. The $99.99 “Special Edition” includes the game, 24-song physical soundtrack, “Relic of Hyrule: Calamity Ganon” tapestry and weather map with emulated wear-and-tear, and a special Nintendo Switch Sheikah Slate carrying case. A $129.99 “Master Edition” was also announced, containing everything from the Special Edition plus a collectible Sheikah Eye Coin and a statue of the Master Sword of Resurrection. 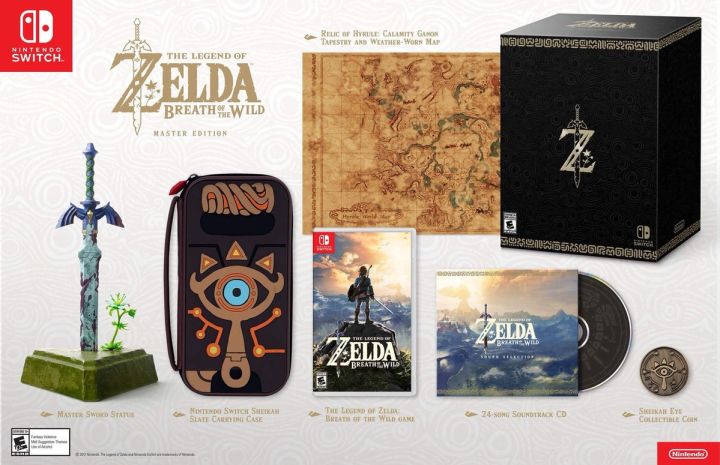 ….This version is already unavailable worldwide, assuming fans aren’t willing to spend upwards of $400 through scalpers on eBay.

Apart from the previously revealed Link, Guardian and Link on horseback Amiibo figures, Bokoblin and Zelda figures have also been announced. The two Links and Zelda Amiibos will all be available on 3/3.

The Legend of Zelda: Breath of the Wild will release for the Nintendo Switch on 3/3. According to Nintendo’s own online store, the Wii U version will release the same day.