An Amiibo-ready New 3DS XL inspired by Metroid is heading to stores just in time for the release of Metroid: Samus Returns.

Metroid fans may want to stuff their wallets before next month, as Nintendo is gearing up for the mighty return of Samus Aran on the small screen. Announced during Nintendo’s first of several E3 2017 Nintendo Treehouse broadcasts, the iconic bounty hunter is finally coming back with Metroid: Samus Returns; set to release in mid-September, the Mercurysteam-developed Samus Returns is a complete remake of 1991’s Metroid II: Return of Samus for the original Game Boy. Though the franchise may finally be returning to its traditional 2D exploration-focused roots, only the most elite of Metroid fans can experience the full extent of what Samus Returns has to offer; previous titles in the franchise tied extra features to game completion percentage and time, but the additional content for Metroid: Samus Returns can only be unlocked with the Metroid-themed Amiibos– all four of them.

Earlier today, Nintendo dangled yet another carrot in the faces of Metroid fans, this time with a special Limited Edition New Nintendo 3DS XL. While it may not include Metroid: Samus Returns itself, the special “Samus Edition” New 3DS XL sports a slick red/orange/gold fractal color-scheme inspired by Samus’s iconic Varia Suit; the bounty hunter herself is stenciled onto the cover, ready to fire her charged Arm Cannon. 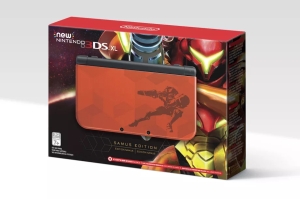 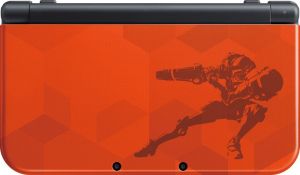 The Samus Edition New Nintendo 3DS XL will release alongside Metroid: Samus Returns on 9/15 for $199.99.