The penultimate version of Fallout 4 arrives next month with a second chance at obtaining that coveted wearable Pip-Boy.

It’s time for the Vault Hunters to dust off their Pip-Boys yet again, with the upcoming release of Fallout 4: Game of the Year Edition. Announced earlier today, the GOTY version of Fallout 4 will include every DLC expansion and update released across all platforms thus far; when players aren’t performing yet another task for Preston Garvey, they may also embark in the “Survival Mode”, or tune their crafting and structure-building skills with the three additional “Workshop” content packs.

Fallout lovers who may not have gotten their hands on the original Fallout 4 “Pip-Boy Edition” will get one more chance to have their own wearable collector’s item; Bethesda will release a second “Pip-Boy Edition” for the GOTY version, however this new version lacks the massive nuclear capsule container. The new collector’s edition includes Fallout 4: GOTY, a wearable Pip-Boy suited to hold most smartphones, a Vault-Tec Perk poster, and the Pip-Boy Pocket Guide. 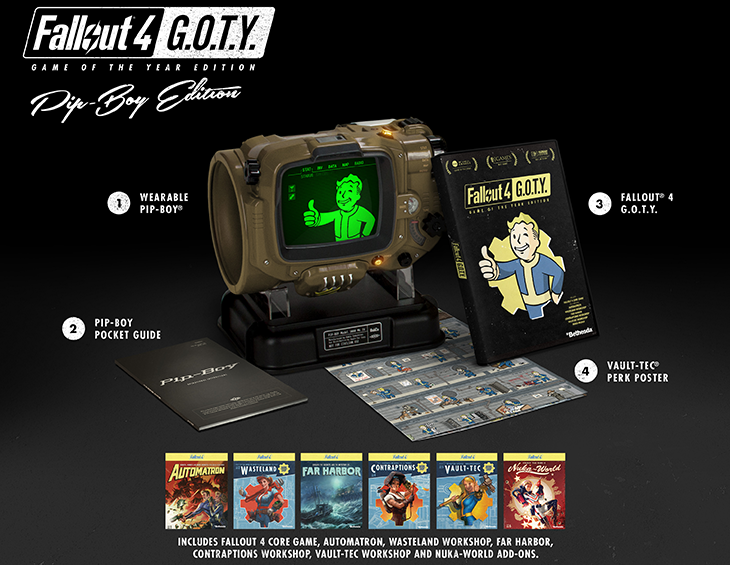 Fallout 4: Game of the Year Edition will release for PC, Xbox One and PS4 on 9/26; the special Pip-Boy Edition will be available through select retailers (currently Amazon) for $99.99, however this version is strictly available in North America.