Now in it’s 23rd year, QuakeCon is the north-Texas home to one of the largest LAN parties in the world. The event began as a humble gathering of a few dozen PC gamers in a room, but has since evolved into a 4-day expo and party dedicated to PC gaming, and all things Bethesda and their partners. QuakeCon 2018 has one of the more robust catalogs of featured titles, coming off the heels of Bethesda’s stacked E3 2018 presentation.

During today’s keynote presentation, id Software’s Marty Stratton and Hugo Martin gave fans the first look at gameplay footage for DOOM Eternal, the direct sequel to 2016’s franchise reboot, DOOM. Set some time after the Doomslayer’s imprisonment, Eternal sees the eponymous space marine return in brutal glory; the Doomslayer is seen sporting stripped-down armor, granting him increased mobility options without sacrificing offensive capabilities. His fists are already overpowered melee weapons in their own rights, however the new suit comes equipped with an embedded knife in the left gauntlet and a shoulder-mounted flamethrower. The Super Shotgun also received an upgrade- the “Meat Hook”- that doubles as both an offensive prod and a grappling hook, letting players traverse the environment by swinging off ledges and weakened demons; despite his size, the streamlined suit also lets the Doomslayer perform basic parkour actions like swinging from pipes and climbing select walls. 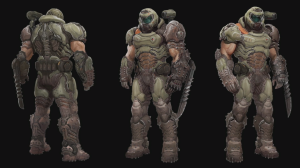 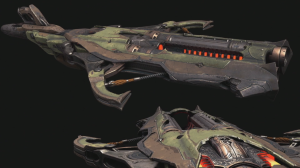 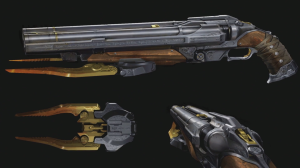 2016’s DOOM saw the return and re-imagining of several classic enemies through the power of idTech 6; the upcoming DOOM Eternal will take this one step further, including “twice” the enemies and demons over the previous installment. New and returning enemy types from 1994’s Doom II: Hell on Earth include the “Possessed Security”, “Arachnotron” and the “Pain Elemental”. New demons include the “Doomhunter”- a demon/robot hybrid presumably constructed for the sole intent of killing the Doomslayer- and the “Marauder”; a curious tidbit from today’s presentation, Martin drew attention to similarities between the Marauder’s and Doomslayer’s equipment, citing story-related reasons behind the new demon’s design. One DOOM’s most engaging gameplay mechanics, the Glory Kill system will return with additional kill animations, and new “destructible demon” gore-skeletons for every enemy, allowing for real-time damage and dismemberment.

As suggested by its source of inspiration, DOOM Eternal takes the Doomslayer’s fight off the surface of Mars and down to Earth, where demonic activity has consumed the entire planet. QuakeCon attendees and online viewers were shown two environments during the course of the gameplay demo- that of a ruined downtown area overgrown with organic tissue, and a UAC outpost on Phobos armed with the incredible “BFG-10000”. The idTech 7 benchmark reel also showcased what appear to be demonic temples and monasteries, a Roman-inspired gladiatorial arena, and a demonic altar infused with futuristic technology.

DOOM‘s multiplayer components were a welcome addition to the title across all versions, but the campaign remained a single-player experience driven solely by gameplay. Though this will ring true for Eternal, players will now have the ability to invade other games; anyone who plays online may enter another player’s campaign as a player-controlled demon, loosely similar to invasions from the Demon’s/Dark Souls franchise and Bloodborne. This isn’t to say DOOM Eternal will be an “always online” title, as Stratton claimed players will have the option to opt-in or out of the invasion feature.

The full keynote presentation can be found below, complete with new updates on Quake Champions, The Elder Scrolls: Legends and TES Online; the DOOM Eternal segment closes-out the keynote at 1:09:07.

DOOM Eternal is expected to release for PC, Xbox One and PS4 next year.