‘A Link To The Past’ Now Available On Wii U, ‘Four Swords’ Currently Free On 3DS 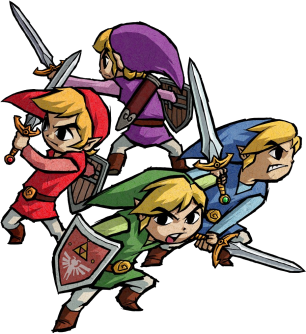 Legend of Zelda fans have a reason to rejoice this weekend, as not only is the SNES classic A Link to the Past now available for the Wii U, but the co-op Legend of Zelda: Four Swords will be free to download on the 3DS until Sunday, Feb. 2.

From today until Sunday, Feb. 2, Nintendo 3DS owners will be able to download The Legend of Zelda: Four Swords – Anniversary Edition from the 3DS eShop for free. Four Swords was the first multiplayer Zelda title, and was originally released alongside the GameBoy Advance version of A Link to the Past. As part of the “Legend of Zelda 25th Anniversary” phase in 2012, Four Swords – Anniversary Edition was released as a digital title, and featured a new stage based on the original Legend of Zelda, Link’s Awakening, and A Link to the Past, and also introduced a Single-Player mode. The title was removed after the celebration, but has since returned for this weekend.

A Link to the Past isn’t the only Zelda title announced for the Wii U, as the work-in-progress “Hyrule Warriors/Zelda Musou” from Tecmo Koei will be coming to the console on a later, unannounced date.

Tagged as: 3DS, a link to the past, download, four swords, free, nintendo, north america, price, Release Date, the legend of zelda, wii u