‘Dead Or Alive 5: Last Round’ DLC Coming To ‘Senran Kagura: Estival Versus’

The cross-promotional content between Marvelous and Koei Tecmo continues, as a DOA character will be playable in the latest Senran Kagura title.

While the popularity of the Senran Kagura franchise is exponentially growing in North America, publisher Marvelous is promoting the franchise by stepping into the fighting game scene, with cross-over DLC content for Dead or Alive 5: Last Round. This weekend, 16 DLC costumes based on characters from the Senran Kagura franchise were released as part of the “Senran Kagura Mashup” bundle. Just like their source material, DOA 5’s DLC costumes can be destroyed during the match, revealing more and more skin as the fight progresses.

Along with the release of the Dead or Alive 5: Last Round DLC, Marvelous announced via Famitsu that Ayane will be a future DLC character, playable in both the PS4 and PS Vita versions of Senran Kagura: Estival Versus. A price has not been revealed, nor is it clear whether or not Ayane will be a cross-buy DLC (i.e purchase once, available for both the PS4 and PS Vita), however the character will be playable for all modes within Estival Versus. 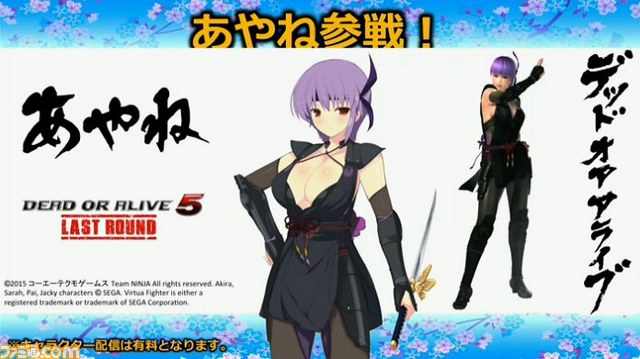 While some may associate the purple-haired ninja with the Ninja Gaiden series, Ayane made her video game debut in the original Dead or Alive, released in 1996 for arcades, 1997 on the Sega Saturn, and the original PlayStation the following year.

Senran Kagura: Estival Versus will also receive three characters from the Ikki Tousen franchise as paid-DLC characters on an unspecified future release date.