The cybernetic head of Ultratech was finally shown in all of her elegance during Combo Breaker, Chicago’s own fighting game convention.

Combo Breaker is Chicago’s fairly new premier fighting game convention and tournament, replacing the previous Ultimate Fighting Game Tournament series. This year’s event is hosting competitions for several popular Fighters, including Mortal Kombat X, Guilty Gear Xrd, Skullgirls Encore and Killer Instinct. For the first time in the US, the current build of Tekken 7 is also playable during the event. As suggested by the event’s title, Killer Instinct: Season Two developer Iron Galaxy was also on-hand as a sponsor and panelist.

Friday evening, KI Season Two‘s final character was given a full on-stage presentation by Team Spooky. Filling the 18th slot on the “Select Your Fighter” screen is “ARIA”, the cybernetic leader of Ultratech Corp. ARIA herself is an AI uploaded into three separate drones; her body is constructed from nanobots emitted from each drone. Players will immediately discover that ARIA has three separate life-bars, one for each drone; her drones can be summoned individually for assist attacks, or allow ARIA to switch between combat “stances”.

By default, ARIA will begin the match in “Booster” mode, indicated by the wings on her back. In this stance, ARIA is granted with the ability to levitate and hover around the stage, however Booster has the slowest walking-speed of the three modes. “Blade” mode replaces one of ARIA’s arms with a giant blade; this mode significantly increases the range of her medium-Punch (MP) and hard-Punch (HP). While in this state, ARIA can perform a “launcher” and a forward-slash with a “Dragon Punch” motion followed by a punch. (Popularized by the Street Fighter series, the DP motion is “Forward-Down-Down/Forward Diagonal”.) ARIA’s final mode, “Base” has the fastest movement speed and a chest-mounted energy cannon.

Depending on whatever drone ARIA is projected from, the other two will levitate behind, ready for use as an assist. The Booster drone will lunge in with a rising forward-tackle, Base can be summoned in for a standing-projectile attack, and the Blade drone can sweep in with a forward-thrust; only one drone can be used as an assist at a time. Once a drone is in-play, it’s susceptible to damage; if a drone is destroyed, that mode is no longer available for the rest of the match.

Once ARIA’s “Instinct” has been activated, all three drones will combine together, granting her with the properties of each mode. Because each drone is technically in-play during Instinct, any damage dealt towards ARIA will be inflicted across all three drones. If Instinct is activated after a drone has been destroyed, it will be replaced with an auto-tracking “fanfare” drone; these drones are temporary, and will fire energy blasts at the opponent’s current position. 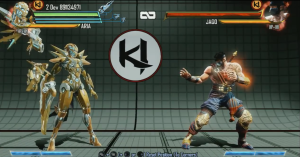 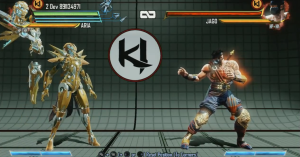 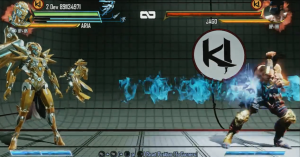 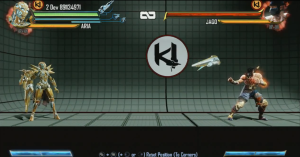 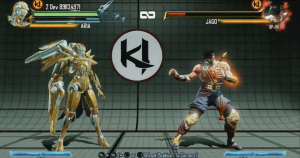 ARIA’s new stage was also shown during Combo Breaker. The Pinnacle is her corporate office atop the Ultratech Tower; the room is ornamented with holograms, Fulgore replicas and active windows that open to reveal the scenic overlook of the city. The Pinnacle also has a “Stage Ultra”, however it was not shown during Team Spooky’s presentation; it was hinted several times that it’s activated on the far right, with the loser being kicked through a window.

The full presentation and breakdown can be found below, or on Team Spooky’s YouTube channel. ARIA’s official trailer is not yet available, nor has an official release date been announced.