Tekken 7‘s controversial new character Lucky Chloe is getting her own Bishoujo statue expected to release this Summer.

The long-awaited Tekken X Street Fighter may not arrive until much later- if at all- however Bandai Namco is already satisfying the Tekken itch in Japan, with the arcade release of Tekken 7. The latest chapter of Bandai Namco’s “iron fist” fighting game franchise is the first in the series to be developed with Unreal Engine 4. The title has yet to release on consoles, however a new version is already underway, with new gameplay features and a surprise cross-over character from the Street Fighter universe- Akuma.

Shortly after the 2014 reveal of Tekken 7 and its expanded roster, the title encountered harsh criticism from select fans over a certain character- Lucky Chloe. Amidst a vast roster of martial artists from several disciplines and regional styles, Lucky Chloe may seem like an oddball character; while the character herself isn’t Japanese, Chloe is an avid fan of J-Pop, dressing like a Japanese idol singer and fighting with her own method of freestyle dance.

Due to the confused, negative feedback of some Tekken players, Producer Katsuhiro Harada mockingly stated through Twitter that she would be a Japanese and European-exclusive character, to be replaced by a “bald, muscular skinhead” in the North American release. While the statement was later retracted, confirming Lucky Chloe’s presence in the future North American release of Tekken 7, the comical jab only led to more backlash from players. 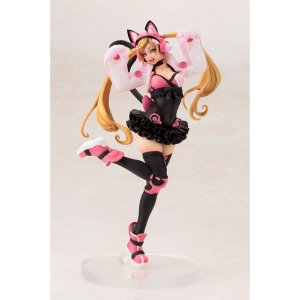 The Tekken 7 Lucky Chloe Bishoujo statue from Kotobukiya can be pre-ordered for $64.99 through Play-Asia, and is expected to release in late July.