The crowdfunding campaign for the Shadow of the Colossus spiritual-successor is underway, with over a third of the initial goal already funded.

Prey for the Gods first appeared with a teaser trailer in October 2015. From developer No Matter Studios, the title is an exploration-driven action-adventure game where the player must fight against titanic ancient deities while surviving harsh dynamic weather conditions. While the most obvious gameplay pull leads to 2005’s Sony-exclusive Shadow of the Colossus, with players tackling screen-filling giants however they please, Prey for the Gods also features survival elements across looting fallen warriors, crafting upgrades and replacement weapons, hunting for food and taking shelter from the bitter frozen environment within caves.

Caves act as a checkpoint system or temporary hub for the player, allowing him or her to rest before venturing back out into the snowy landscapes to explore, hunt or attempt to kill one of the leviathans of the world. If the player remains exposed to the harsh blizzards of Prey for the Gods for too long, he or she will take damage; while there’s currently no details regarding an in-game map system, the player’s footsteps are left behind in the snow, allowing him or her to backtrack to their cave.

Nine months after its initial reveal, No Matter Studios finally launched a crowdfunding campaign for Prey for the Gods on Kickstarter. If the initial goal of $300,000 is met before the campaign closes next month, the title will release for PC with five unique bosses, ranging from bipedal to flying creatures. Additional Stretch Goals up to $1 mil. are listed, featuring an expanded gameplay environment, four additional bosses with unique arena artwork, an orchestral score, Survivor Mode boss gauntlet, and future Xbox One and PS4 versions.

Those interested in contributing to the Kickstarter campaign can do so at the minimum Backer tier of $5, however a minimum contribution of $15 is required to receive a copy of the game at its projected launch window. Higher contribution rewards include a high-resolution map, cosmetic DLC, a T-shirt and physical map of the game world, Beta and Alpha access, the chance to be in the game as a statue,  or collaborate with No Matter to design a personal ultra-hidden area in the game. 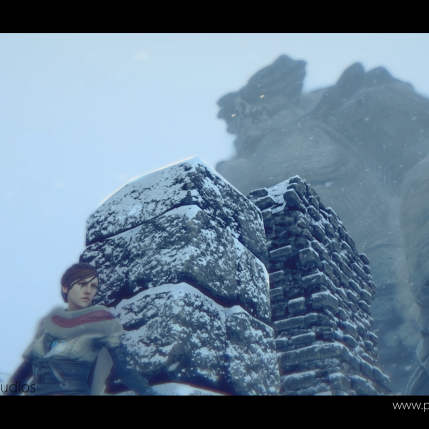 If the Kickstarter campaign is successful, Prey for the Gods is expected to release for PC in Dec. 2017. Xbox One and PS4 versions may arrive on a later date if the campaign reaches its $600,000 Stretch Goal; as of this post, the Kickstarter is currently sitting at $106,887/300,000.

Tagged as: crowdfunding, kickstarter, No Matter Studios, PC, Prey for the Gods, screenshots, Shadow of the Colossus, trailer