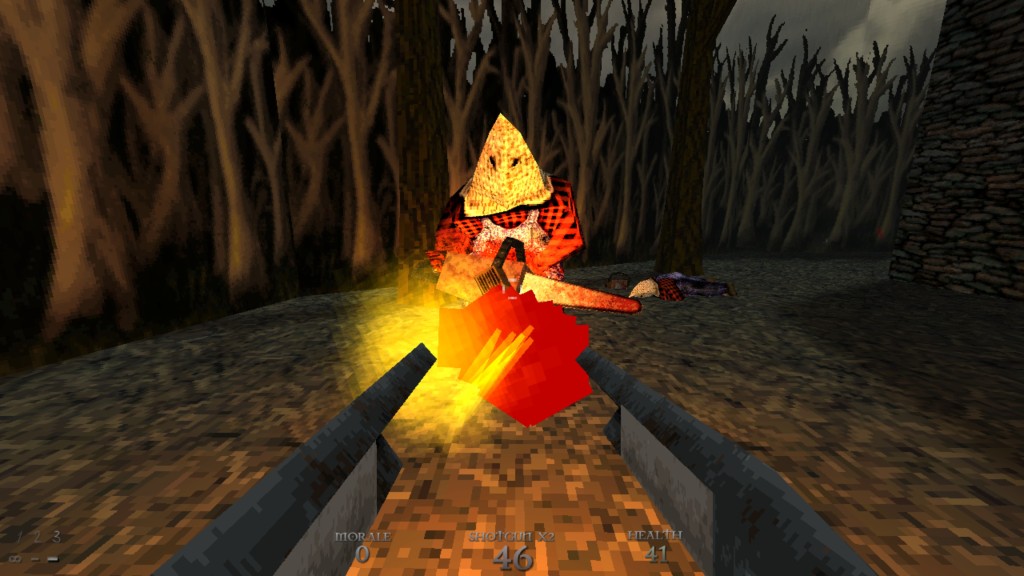 DUSK is the perfect marriage of DOS-era shooters and 80’s horror cheese, and will be ready to terrorize PCs this Halloween.

The 90’s have returned with a vengeance, swinging that metal bat harder than ever before. Following an extended shift towards the “cinematic experience”- being melodrama and story-dependent progression- there’s a strong lust for the glory days of first-person shooters, as seen with the resurgence of Shadow Warrior, Wolfenstein, Doom and Quake. id Software, Machine Games and Flying Wild Hog may be reviving old franchises underneath a new coat of chrome, but independent developers and studios are doing everything in their power to drag the definitive 90’s FPS experience back into the spotlight, low-resolution textures and character models included.

From David Szymanski, audio sorcerer Andrew Hulshult (Brutal Doom, Rise of the Triad, Bombshell) and the talented crew at New Blood, DUSK looks to be the next title to deliver the long-lost art of the classic FPS when it hits PCs this Fall. DUSK first appeared last year as a single-level demo under the helm of developer David Szymanski, but has since won the hearts of many at PAX, and again at QuakeCon 2017 with a completed version of its first “Episode”. From the moment the initial dialogue “Kill the Intruder” drops, players are met with a relentless crimson-coated adventure that never lets up until the final level is complete. DUSK‘s most obvious influences stem from the early DOS FPS era- specifically Doom, Quake, Hexen, Heretic and Redneck Rampage- but there’s the extra bonus of 80’s horror movie cheese; being set in the backwoods of the Northeast US, many of the locals are run-down dilapidated towns, farms and single-room churches- perfect homes for the occasional cultist, deranged murderous lumberjack, shotgun-equipped scarecrows, demons and horrific military experiments.

As previously mentioned, DUSK is a relentless shooter inspired by the best of the early FPS era. Players whisk through levels as if their wearing rockets; even holding “Left-Shift” to walk is faster than the majority of modern shooters. The initial gameplay sequence lets the player immediately know he or she is in for an authentic 90’s experience, as the first projectile weapon- the Pistol- is found by discovering a “Secret”, one of many hidden areas within each level; most are found through basic exploration, however some may require players to unleash dormant techniques, such as gaining speed through strafe-hopping to clear rooftop gaps.

All of the iconic DOS FPS toys are present in DUSK, ranging from the Sickles and Pistol up to dual-wielded Shotguns and the Grenade Launcher. Though the game may present itself as a classically-influenced title, DUSK still possesses a few modern gameplay mechanics; players can “Right-Click” to aim down the sights of any firearm, and manually reload weapons with “R” if they desire; it’s not necessarily a “modern” tactic, but the Grenade Launcher allows for players to rocket-jump their way around each level, assuming they have enough health to prevent an untimely- if not impressive- early death. DUSK also features arena multiplayer and “Endless Mode” for players to bet their skills against nonstop waves of enemies outside the episodic campaign. Those who may not appreciate the low-texture default aesthetic also have the option of enabling smoother, “high” resolution textures and models; Andrew Hulshult’s soundtrack is here to stay however, because as 2016’s DOOM has shown, nothing is more satisfying than killing monsters and cultists to the sounds of aggressive rock. 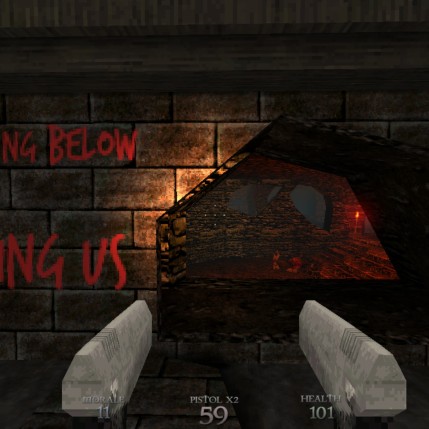 DUSK is expected to release for PC on Halloween, but for those interested in getting a head start on the action, the title recently went on sale through Steam Early Access for $20; QuakeCon 2017 attendees may also purchase the game directly from New Blood in the Exhibition Hall.