The third Valentine sister and brief antagonist of -REVELATOR- finally has a collectible figure now in development.

Hopefully the first of many, Tracer is the first Overwatch character featured in Good Smile’s Nendoroid series. 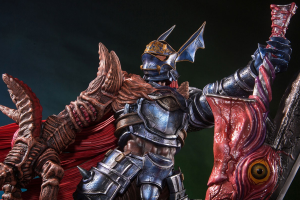 Consumed by the very blade he wields, Soul Calibur’s antagonist Nightmare is getting a new statue produced by First4Figures.

Hammerhead’s star mechanic gets her very own Play Arts Kai collectible scheduled to release this Summer.

‘Zelda: Breath Of The Wild’ Nendoroid Figures Coming This June

Two new Nendoroid Link figures are set to arrive this Summer, just months after the long-awaited release of The Legend of Zelda: Breath of the Wild.

Play-Asia has a slew of collectibles and international games on sale to celebrate the Year of the Rooster.