Mighty Switch Force! is a plane-shifting puzzle-platformer from developer WayForward. The series follows android Patricia Wagon through her occupations as a police officer- and a firefighter in the sequel- as she navigates her way towards apprehending criminals and dousing fires by shifting the environment to her will. Originally 3DS eShop-exclusives, Mighty Switch Force! and Mighty Switch Force 2! have been ported to PC and the Wii U with updated visuals and reworked gameplay mechanics.

WayForward has been teasing a new Mighty Switch Force! title through their official Facebook page, releasing a handful of school-themed promotional pieces with series protagonist Patricia Wagon. Moments ago, it was revealed that the next chapter of the MSF saga will be Mighty Switch Force! Academy, launching tomorrow through Steam Early Access. Unlike the previous installments, Mighty Switch Force! Academy will feature the entire stage on one screen, akin to classic arcade titles. Players are still able to shift blocks between the foreground and background as before, along with the new “screen wrap” feature, allowing for players to travel between the sides of the screen (i.e. Kid Icarus, Pac-Man). The game will be presented in 1080p with support for local multiplayer and 4-player versus modes “on every level in the game”.

According to statements on WayForward’s Facebook page, Mighty Switch Force! Academy may come to other platforms if the Steam release is successful.

Mighty Switch Force! Academy will release on 8/25 for PC via Steam Early Access. The debut gameplay trailer can be viewed on the official Early Access page. 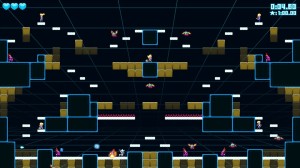