Last week, developer Volition announced Agents of MAYHEM as a brand new IP set within an extended Saints Row universe. Fans of the Saints series may have noticed that Ultor, a stylized fleur-de-lis, and the signature purple-and-black theme are all present in the Agents of MAYHEM debut trailer.

Details for Volition’s new IP are dripping out exclusively through IGN’s “IGN First” at E3 2016 this week. Agents of MAYHEM is set in the future Earth after receiving the “recreate Earth” ending in Saints Row: Gat out of Hell.  Led by Persephone Brimstone and backed by the Ultor Corporation, MAYHEM (“Multinational Agency for Hunting Evil Masterminds”) is established after LEGION (“League of Evil Gentlemen Intent on Obliterating Nations”) and its “Ministries” launch a simultaneous attack around the globe; players will control the Agents in their fight against the Ministry of Pride and “Doctor Babylon” in Seoul, South Korea.

A recent IGN First interview with Project Design Director Anoop Shekar confirms that Agents of MAYHEM will be a strictly single-player experience. Fortune, Hardtack and Hollywood were revealed through the debut trailer, however players will have access to 12 unique Agents from around the world, with the ability to cycle between 3 of them at will; prior to each mission, the player selects and equips 3 MAYHEM Agents with custom weapons, gadgets and cosmetic items once unlocked. Similar to Overwatch‘s “Overdrive” mechanic, each Agent possesses a “MAYHEM” attack; if the player fills the Agent’s MAYHEM gauge through combo strings and score bonuses, the character will unleash a timed ultimate attack, such as Fortune unleashing her “GLORY” drones on enemies. 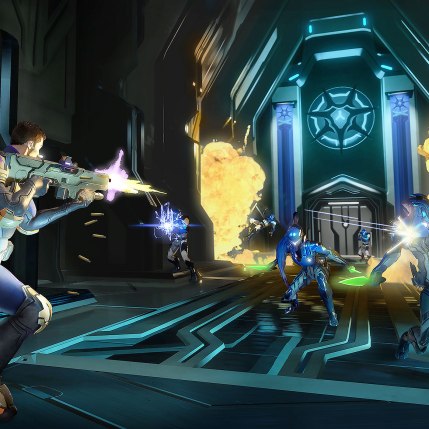 According to Shekar, Agents of MAYHEM‘s 12 characters are relatively categorized by attack range and movement properties, however the game will be balanced in such a way where players aren’t forced to choose specific Agents to progress; though it may pose more of a challenge Shekar states that players should be able to complete the game “with Agents that they really enjoy”.

Agents of MAYHEM will release for PC, Xbox One and PS4 sometime in 2017.