Become the ultimate spectral assassin in the deceptively challenging Aragami.

From Barcelona’s Lince Works comes Aragami, a new Stealth title sure to challenge the best of ninjas. As an agent of the shadows, players must familiarize themselves with the darkness, as the shadows are their only protection in this difficult ninja escapade into the fortress of Kyuryu.

Players assume the role of an “Aragami”- a supernatural assassin forged from dark energy. A vengeful ninja forged from darkness, the titular character gains power from the shadows, conversely taking damage from natural light. His inevitable fate is unclear, though Aragami’s current task is to free his captive summoner Yamiko and the enigmatic “Empress” from the city-fortress Kyuryu, occupied by the Kaiho clan and their Army of Light. Key story elements are presented through conversations between Aragami and Yamiko’s projection and brief animatic sequences. Invested players will discover more clues regarding the Kaiho, Yamiko and the Empress through soldier dialogue and Scrolls hidden within each Chapter. While the plot and presentation are fairly minimal, Aragami‘s story holds enough intrigue and character depth to have players question the true motives and morality of Yamiko and Aragami.

Aragami is a raw Stealth title where the darkness is the player’s only safe haven. The core mechanics are simplistic, however newcomers to the Stealth genre may initially find themselves in a tight bind due to the lack of any map or indicator of enemy awareness. Being a shadow-spirit, Aragami’s garb will turn black when cloaked in shadow; in this state, the ninja assassin is near-invisible to enemies. Aragami can move freely within darkened areas, however sprinting will alert soldiers to the sound of the assassin’s footsteps. Once Aragami is close to a soldier, he can perform a quick Stealth Kill; if another soldier inspects the corpse of a fallen comrade, he will alert every enemy within the area of your presence. Players have a brief period to retreat into the shadows if detected by an enemy, shown by an arrow that changes from yellow-to-red, with red meaning Aragami has “officially” been spotted. Due to the Kaiho Army of Light’s light-infused weapons, any attack will banish Aragami from reality with a single strike, forcing the player to restart from the previous checkpoint. 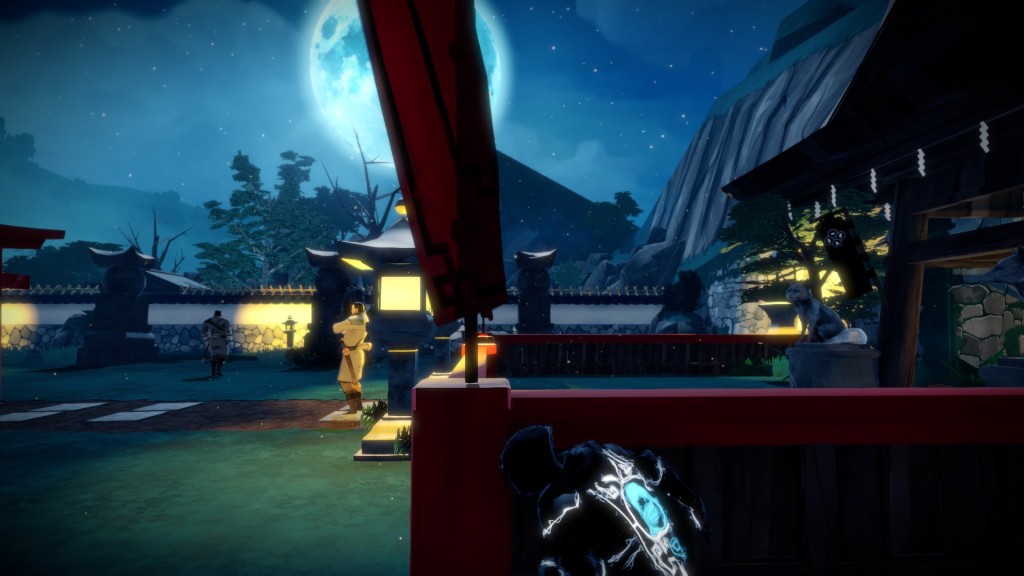 The one-hit-kill nature of Aragami is bound to frustrate some players, but fortunately Yamiko’s ninja assassin has a plethora of magical abilities at his disposal. Aragami lacks traditional HUD elements, instead placing all key information on Aragami’s back; the intricate line-work of the ninja’s cape acts as a real-time magic gauge. With each magic-based technique, the light on Aragami’s back will decrease until the decor returns to its normal red-and-black coloring. The most crucial of Aragami’s techniques are his shadow-teleport and ability to cast temporary shadows on most surfaces: Aragami can cast and warp to a beacon in dark areas, allowing him to quickly traverse the environments without the alternative risk of alerting guards by sprinting; depending on how bright the area is- be it the ground, a ledge, or even a tree- Aragami can place a temporary shadow on the surface for teleportation, or to literally stay hidden in plain sight.

Additional techniques can be purchased from Skill Points obtained after finding hidden Scrolls within each Chapter. Future abilities grant Aragami the power to summon decoys, detect soldiers through walls, vaporize corpses [so long as they are within a shadow], lay wormhole-spawning traps, and summon a shadow-dragon from the darkness. Abilities are selected through a wheel interface, with the chosen icon appearing on Aragami’s cloak. The player can only use their enhanced magic techniques twice, shown with the two insignia on Aragami’s cape; each level contains single-use Shrines used to recharge Aragami’s abilities. With enough unlocked techniques, the player can easily become a swift killing machine; if the player is willing to take the -500 score penalty for raising an alarm, he or she could cast a shadow at the feet of an unsuspecting soldier, teleport down for a Stealth Kill, lay a trap with “Shinen”, then disappear into the shadows and spring the trap once a soldier discovers the body and alerts all guards to his position. Players can use one technique immediately followed by another, however some abilities will not stack; in the case of the “Kage” (Invisibility) and Shinen (Trap) powers, Kage will deactivate once the trap has been placed.

15 Chapters and the occasional boss fight will test the player’s understanding of the Stealth genre. The title uses the Feudal era as its backdrop, with beautiful palaces, gardens and forest Kaiho encampments occupying the majority of the game. The first Chapter- the tutorial- may be a blatant exception, but the Chapters that follow are all open-ended shadow-playgrounds to be conquered however the player sees fit. An early showstopper takes the form of Chapter 5: Players are tasked with infiltrating a large enemy stronghold and palace built upon an aqueduct; it’s here where Aragami turns into a true ninja game, inviting players to sprint across rooftops, teleport between pagodas and suspended walkways, and leap across the rafters within the palace roof. The soundtrack compliments the regal setting with an assortment of well-crafted Chinese-inspired pieces. Composed by Two Feathers Studio, the music leaves players continuously in suspense with its intense string arrangements that actively swell and recede alongside the player’s actions.

Aragami is a fantastic journey back into old-school ninja-assassin games, sitting beside the likes of the Tenchu franchise. Those looking for a raw organic Stealth title, Aragami is sure to deliver.