Shadow Warrior first appeared in 1997 joining other PC golden age shooters DOOM, Wolfenstein, Rise of the Triad and Duke Nukem 3D. Though not quite as successful as its brothers, Shadow Warrior sparked a cult-following thanks to its less-than-politically-correct protagonist and wide array of weaponry. The title deviated from the traditional FPS formula by introducing extended melee features through swordplay. The franchise resurfaced with Shadow Warrior in 2013 under the developer/publisher team of Flying Wild Hog and Devolver Digital. Flying Wild Hog’s re-imagining of the title featured a young, cocky and bombastic iteration of protagonist Lo Wang, and additional melee mechanics allowing players to swing blades in eight directions.

Three years later, Flying Wild Hog and Devolver Digital are sending Wang on another wild mission with Shadow Warrior 2, currently a timed-exclusive for PC. The reboot sequel adds four-player Co-Op and a hefty amount of lethal playthings; roughly 71 weapons are at the players disposal, along with a bevvy of offensive magical abilities. For his second outing, loud-mouthed assassin Lo Wang finds himself in the employment of the Yakuza, tasked with retrieving the boss’s daughter Kamiko from previous villain Orochi-Zilla. To Wang’s dismay, Kamiko is found in the heart of Zilla Labs with a sinister ritual already underway; Orochi-Zilla’s arcane ritual infuses Kamiko with dark energy, albeit corrupting her body in the process. Kamiko is rescued from Zilla Labs and taken to Master Smith for further examination; an impeccable swordsmith and Master to both Lo Wang and Kamiko, Smith discovers that Kamiko’s soul can be extracted from her corrupted body, but it needs to occupy a vessel while the dark energy is removed from her physical form. Wang reluctantly allows himself to act as a temporary vessel for Kamiko; the two form a dysfunctional bickering pair, however Kamiko’s presence grants Wang additional capabilities, such as the ability to teleport between Goddess statues (i.e. a story explanation for a key gameplay mechanic). Lo Wang and Kamiko set off to find ingredients for Smith’s cure, however Kamiko’s physical body mutates and escapes the Wang Cave, thus sending the duo on an epic quest across the land.

As entertaining as Lo Wang’s and Kamiko’s argumentative romp may be, Shadow Warrior 2 can often feel like a retread of the 2013 installment, due to the ever-present theme of betrayal, and a disembodied entity once again aiding Lo Wang on his journey. Several characters reprise their roles from the previous title, but mostly as side-mission content. For such an energetic 20-hour ride filled with offbeat humor and action, Shadow Warrior 2 ends abruptly with little resolution; all of the pieces fall into their respective places, but there’s no actual conflict-resolution- a string of random events lead to a jarring black-screen finale. This may suggest future DLC or a reboot trilogy, but players wanting fulfillment at the end of the game will be severely disappointed.

The latest in a series of 90’s reboots, Shadow Warrior 2 features the speed of an old-school FPS with the chaos of a large-scale or arena shooter. Players are given a surprising amount of mobility courtesy of Lo Wang’s double-jump, sprint and dash; speed-running players can find themselves racing across areas at lightning speed thanks to the absence of a stamina meter. As with the previous Shadow Warrior titles, the player has an arsenal of melee and ranged weapons at his or her disposal. Where the majority of shooters have a defined “loadout” limiting the amount of carried weapons, Shadow Warrior 2 lets players acquire every single item and weapon to be stored in a separate inventory; players can then select or shuffle 8 weapons from their catalog to be used in their primary loadout. Be it a gun, rocket launcher or chainsaw-katana, every weapon includes three “Rune” slots for players to customize the strength and elemental properties of the weapon; Runes are frequently dropped by fallen enemies, however players will unlock the ability to craft Runes once they progress far enough into the game. Players also have the option of customizing Lo Wang himself with various “Amulets”, each yielding its own perks and status upgrades; Wang can only possess one Amulet at a time, however players can boost his personal abilities with up to three armor-specific Runes.

Wang gains “Karma” for every slain enemy, be they demon, mutant, cyborg or Yakuza. Once the Karma gauge- the dragon in the bottom-right corner- fills, Wang will gain an “Experience Point” to be used for enhancing magical abilities. While some abilities are earned through progression, curious players may find new elemental and offensive powers through enemy loot drops and hidden treasure chests. Shown as a circular meter next to the Health and Chi gauges in the bottom-left, Wang eventually unlocks a berserk “Rage” state. This mode changes the screen to red with enemies highlighted in white; not only does time slow to a crawl, but Wang deals additional damage, of which can be raised through Experience Points.

Players will find themselves spending a decent amount of time in the Wang Cave, the new central hub of Shadow Warrior 2. Lo Wang’s trashed bachelor pad, Master Smith’s cave and the surrounding shops are home to eventual quest NPCs and shopkeepers. Color-coded Quests are given from various NPCs around the area, between yellow “Main” missions and blue “Side” quests. Side missions are completely optional, however the game may suggest the player completes them due to the extra Karma boost and new weapon potential. Shadow Warrior 2 may not be an interconnected sandbox game, however players are free to explore each of the massive areas in “Free Roam” once each mission is complete; a suggested route is shown on the map, though each area can be completed in a manner of ways, locked doors and key items pending. Those willing to invest the time will uncover secret mini-bosses in each mission, hidden collectible statues, and a plethora of Easter Eggs and pop culture homages; true explorers may discover nods to the likes of other Devolver Digital and Flying Wild Hog games, Minecraft, Pokemon, and even the Harry Potter films.

Shadow Warrior 2 is a vivid escape from the recent torrent of military shooters thanks to its bright visuals and unique- if not macabre- enemy designs. Wang and Kamiko’s adventure is mostly tied to rural villages, towns and the occasional forest, however players will also find themselves in the fluorescent digital facilities of Orochi-Zilla. This bizarre clash shines most during select outdoor missions, as mutated feudal samurai storm through the forest, funneling into a high-tech Zilla outpost. NPCs may not run rampant throughout the environments of Shadow Warrior 2, but the trees and fauna breathe life into each area with constant dynamic motion; enemies not alerted to Wang’s presence will wander aimlessly, acting in random fashion. A more lewd homage to the original game, rabbits are en masse “doing what rabbits do”, complete with animations and heart icons. Though not as apparent with lower graphical settings, enemy models have modular gore-skeletons, allowing players to dismember mutants, demons and other villains with surgical precision; an added bonus is found within the heavy chainsaw weapons; the player can manually control and dissect their foe by holding the Right mouse button.

The beauty of Shadow Warrior 2 can be immortalized in an internal “Photo Mode” accessible from the Pause Menu. At any point during gameplay, players can pause and access the Photo Mode to take a custom screenshot of the game; featured tools and enhancements include the likes of vignetting, color adjustment, bloom, depth-of-field, SSAO (screen-space ambient occlusion), chromatic aberration and resolution enhancement- beyond 4K if the hardware allows. 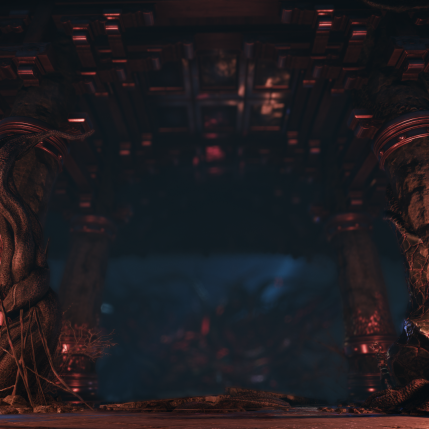 While the music tends to lean on ambiance, the soundtrack never shies away from accenting the intense action of Shadow Warrior 2; whether its the sidewalks of a rural village or the corridors of Zilla Labs, tribal drums and pulsing techno beats never fail to make the player feel like the ultimate unstoppable force.

Surprise ending aside, Shadow Warrior 2 is a fantastic adrenaline rush stuffed with plenty of content to keep players glued for the full 20-hour ride. As the Holiday season ushers in some of the heavy-hitting multiplayer shooters, those wanting a story-oriented single-player or Co-Op experience will be delighted with what Flying Wild Hog and Devolver Digital have to offer.