The first of the teased wave of DLC characters shines in the latest KOFXIV trailer. 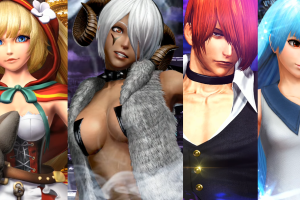 KOFXIV’s Iori costume kicks off a series of DLC items planned for Spring, including more costumes, stages and additional characters.

‘The King Of Fighters XIV’ Comes To NA This August

The who’s who of SNK Playmore return for another bout in The King of Fighters tournament this August.