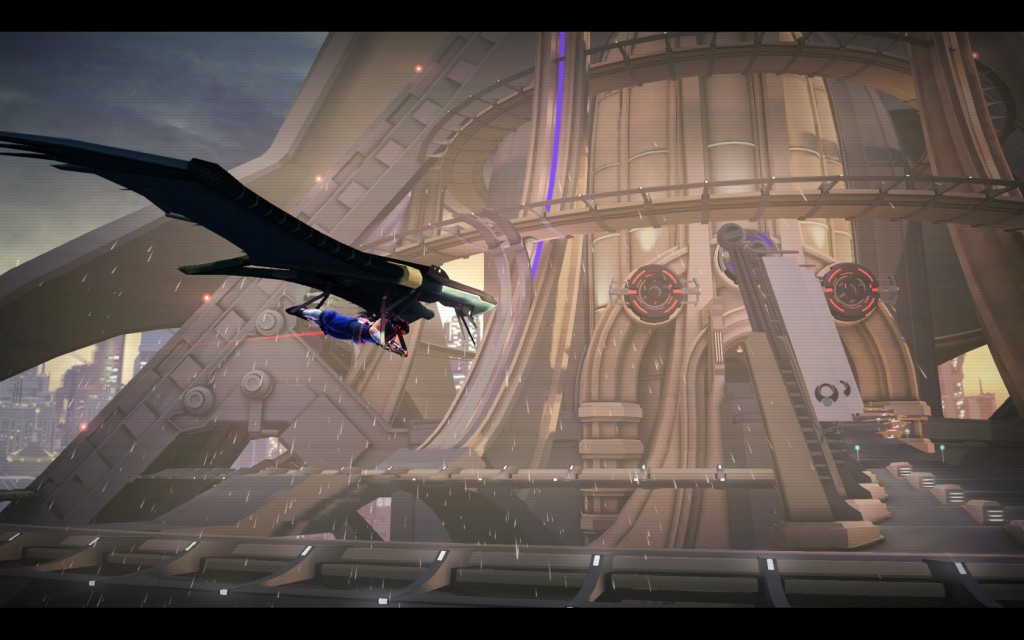 In 1989, a lone ninja was sent into Kazakh City to assassinate Grandmaster Meio; 25 years later, Strider Hiryu returns to the futuristic metropolis of Kazakh once more, in stunning HD fashion.

Strider Hiryu is one of Capcom’s most beloved characters, among the ranks of Mega Man, Leon Kennedy, and the Street Fighter cast; despite a lack of recent headlining titles, Hiryu continues to make cameos in Capcom fighting games- the most recent being Ultimate Marvel VS Capcom 3. After over a decade-long drought of games, and the release of several “clones”, Capcom and Double Helix have brought the futuristic ninja back to consoles and PC with his own pseudo-remake of the first title, Strider.

Strider– or Strider HD according to the digital soundtrack- is a retelling of Hiryu’s first major assignment, with gameplay elements from other titles in the canonical series; Not only is Strider HD is based on the original 1989 Arcade and Sega Genesis game, but it also features aspects of Strider NES and Strider 2 for the original PlayStation.

Strider Hiryu is a member of an elite, technologically altered group of ninjas known as Striders. The youngest member in the history of Striders to achieve an A-Rank class, Hiryu is tasked with the mission of infiltrating Kazakh City (Kazakh SSR, depicted in the year 2048), where he must assassinate Grandmaster Meio and his powerful forces of both the technological and supernatural kind. Strider Hiryu is armed with a cipher- a sword that leaves an energy trail behind every slash- and a variety of mechanical and energy-based aides at his disposal, including an eagle and panther composed of plasma, and a small machine that gravitates around him that can be used to reflect projectiles. Apart from this, the acrobatic ninja is capable of climbing onto any surface with the help of his sickle. The overall plot remains primarily unchanged, but has been expanded upon in subtle ways to suit the new presentation of Kazakh City (i.e. the existence of the giant cyborg gorilla). 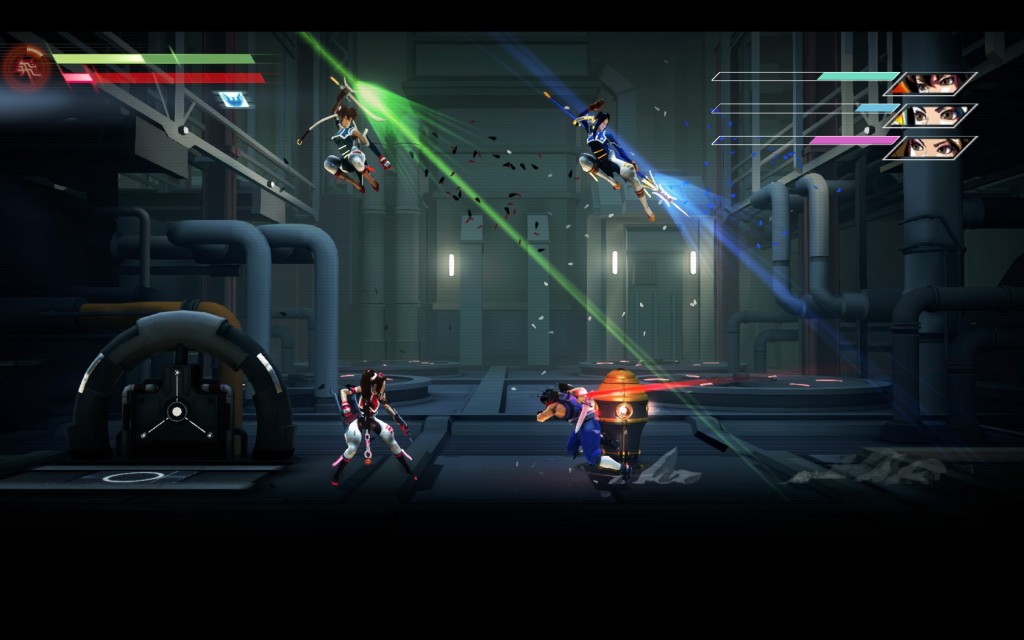 Dedicated Strider veterans and casual fans alike will find that the new rendition of Strider is an homage to not just the original Arcade/Genesis game, but the NES title and PlayStation Capcom-sequel as well; even some of Strider Hiryu’s fighting-game tactics are present in Strider HD. Where the original game was a fairly linear side-scroller, HD takes from the NES title and opens Kazakh up into a nonlinear, interconnected space, filled with various tiered environments, complete with hidden areas and save-rooms: The Metroid and Castlevania games feature this style of open-world gameplay, thus inadvertently creating the term “Metroidvania”. Most of Kazakh is available to explore at the player’s will, but certain areas require enhancements found through game-progression, in order to keep player’s from wandering too far off track. Taken from Strider 2, Hiryu’s cipher features a wide variety of perks which are unlocked and expanded upon as the player progresses, including the ability to reflect various projectiles, and to freeze objects and enemies. The futuristic ninja can use his cipher- and later kunai- to attack in any direction, and to unlock various doors and solve puzzles. Hiryu also possesses the ability to increase his damage for a very brief period of time; a separate hit-gauge next to Hiryu’s health and energy will increase for every landed enemy attack; when the gauge is full, Hiryu’s damage-output will double for a very short period of time. Any damage taken will cause the gauge to decrease.

Initially, Hiryu is a surprisingly “immobile” character compared to his past incarnations; players can still climb and attack from just about any surface, and can slide underneath obstacles, but Hiryu lacks the ability to double-jump and dash in the early-game stages- roughly the first 1-2 hours of gameplay. Once the extra movement capabilities are earned, Strider Hiryu is a chaotic delight to control. As Hiryu’s repertoire of abilities increases, and the map of Kazakh City starts filling itself in, players may find that it takes a lengthy period of time to traverse the futuristic Russian cityscape; fortunately, fast-travel locations are scattered about Kazakh, and are enabled once the player finds both Hiryu’s Option-C (Eagle) and Option-B (Panther) abilities. 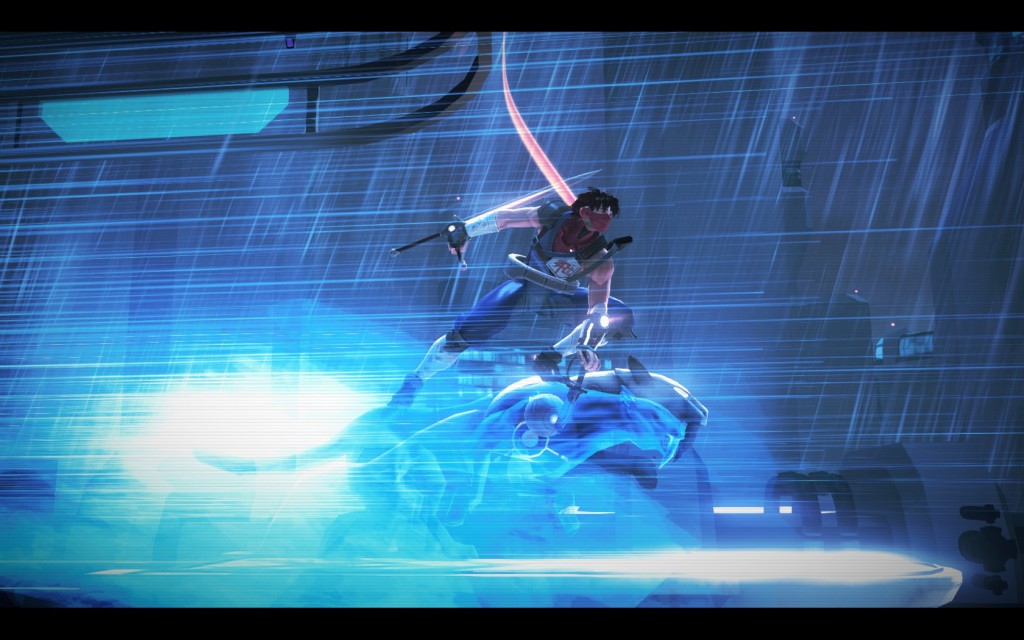 while older Strider games could be drastically simplified to the point of “run forward and slash things”, none of them were considered to be an easy-win; Strider HD is no exception. The first few moments of the game fall into the oversimplified “run forward and slash things” description, but Strider soon becomes a very challenging ordeal, pushing the player’s combat and platforming abilities to reasonable limits: Strider is difficult by design, not by chance; every hazard is presented in such a way that allows the player to assess the situation and plan a strategy to conquer said situation, whether it’s navigating a maze of lasers, or having to reflect a myriad of projectiles back at mounted turrets…while dealing with armored mechanical spiders and shielded cyborgs- there are no “cheap deaths”. Some situations and bosses can become overwhelmingly frustrating, but most conflicts have a simple solution that reveals itself over a few player-respawns; it’s worth noting that Strider is very generous with Checkpoints, as players would otherwise waste precious moments backtracking through the expansive Kazakh City.

While various sources title this as Strider HD, Strider isn’t exactly a high-definition port or reskin- it’s a “re-imagining” of the original adventure. Where Strider Arcade/Genesis and Strider NES featured varied industrial and natural environments, Strider 2014 is set entirely within a city landscape, layered with a subtle rasterized visual filter to emphasize the futuristic setting: From the moment Hiryu drops in from his glider, to the not-quite-final moments of the game, players venture through all areas of the techno-industrial Kazakh City; while it lacks the Egyptian and jungle themes of classic Strider titles, players are introduced to pristine governmental architecture, dank industrial working areas, the neon-engulfed underground slums, and cybernetic research facilities to name a few. As Strider is presented in 2.5D (a game with 3D visuals, but 2D side-scrolling gameplay), background environments are fleshed out and often feature animated characters or some form of conflict within the area, adding extra depth and scale to each subsection of Kazakh City. Despite the player being in a cityscape for the primary duration of Strider, Kazakh City conveys itself as a living environment of its own, with plenty of diversity that continues to renew itself throughout the course of the game. 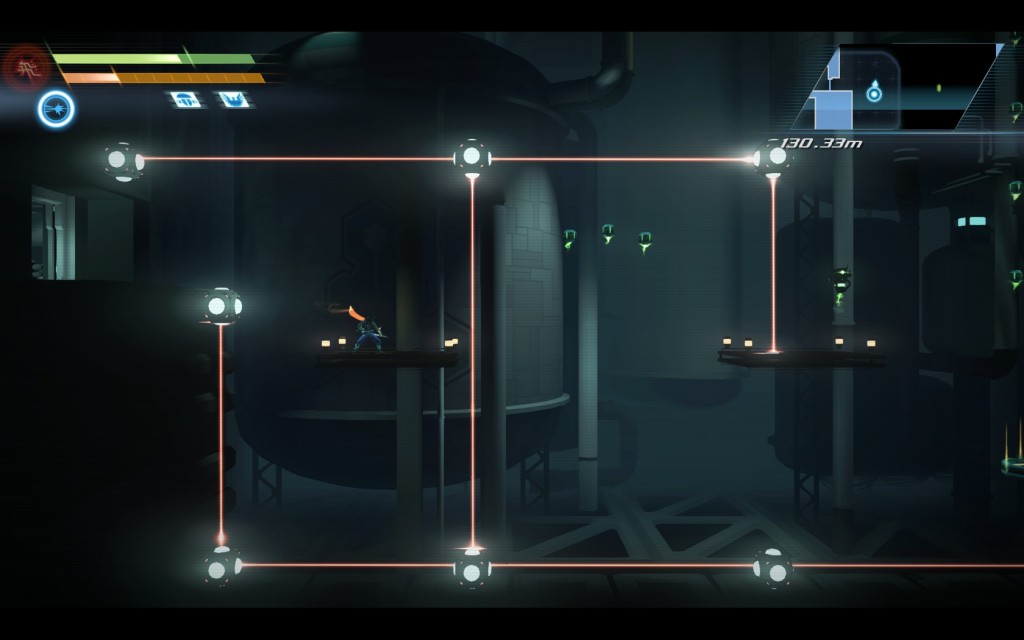 Expanding on Strider paying homage to past titles, the soundtrack features remixed selections from other games in the series, while retaining a “retro” sound that emulates music found in games from older consoles; tracks remixed for Strider include the likes of “Kazakh Theme” and “Egypt Theme” from Strider NES, “Raid” and “Coup” from the Genesis version of Strider, and “Armed Fortress” from Strider 2:

March 7 will mark the 25th anniversary of the original release of Strider in arcades; while the main canonical series may not have a vast collection of titles, the scarf-equipped ninja has a large following, enough for Capcom to feature Hiryu in cameo roles in other games. Due to the sparse nature of the series, fans are divided between dedicated veterans, and those who may only know Strider Hiryu through Capcom’s fighting games; fortunately, this new Strider brings the best elements of the series together into a solid, polished title that Strider fans of both sides can enjoy.