Under Night In-Birth is the latest French Bread fighting game to come state-side, even if it is a few years overdue. The Sony-exclusive anime-fighter may have plenty to offer in terms of gameplay and style, but Under Night In-Birth Exe:Late is severely lacking in explanation and plot.

Co-developed by Ecole Software and Soft Circle French Bread, Under Night In-Birth made its arcade debut back in September 2012. A year later, the updated Under Night In-Birth Exe:Late arrived in arcades; the game would finally come to the PS3 with the help of Arc System Works in July 2014. With Aksys Games taking the role of North American publisher, Exe:Late finally came overseas as a PS3-exclusive. While all of the text has been translated, all dialogue is still presented in its original Japanese, with no English alternative option.

Those who attempt to jump directly into the story of UNIEL will find themselves undeniably lost. A prologue is included within the Fighter’s instruction manual, but it only aids in establishing a small percent of the “Hollow Night”, the event in which the entire game is set:

The Hollow Night is a monthly occurrence, where monstrous shadow-creatures known as Voids are summoned into the real-world. These tormented beings are lost to an eternity of feeding on humans who possess the power of “Existence”, often notated as “EXS”. If an EXS wielder is attacked by a Void and survives, he or she will become an “In-Birth”. In-Births are enlightened EXS users, capable of harnessing the power of their own Existence, at the cost of being thrust into a state of physical limbo; In-Births are neither living nor dead. This particular Hollow Night involves a conflict between Under Night’s three factions- the “Licht Kreis”, “Night Blade” and “Amnesia”. Amnesia’s leader Hilda plans on obtaining the power of a “Re-Birth” to bend the will of the Hollow Night to her own liking; despite the conflict based on the past actions of the Licht Kreis and the Night Blade, both groups- along with a few rouges- set out to prevent Hilda from gaining ultimate control over Voids and the Hollow Night itself.

Even after doing external research on UNIEL‘s present-day world, those who have not invested in the lore will still find themselves confused, as several terms, key characters and organizations are thrown at the player without any explanation. Each character’s role as an In-Birth is made even more complicated by his or her title; Hilda is referred to by her name, her ability “Paradox”, and even as “Amnesia”; Byakuya is referred to by his weapon “Predator”, and his EXS ability “Chelicerata”.

Outside of the Arcade Mode, players can hack away at the Score, Survival and Time Attack modes. Both Score and Time Attack involve the player fighting through 10 opponents, attempting to reach either a new high score, or trying to beat each stage in the shortest amount of time. Survival throws an endless gauntlet of matches at the player, where only a sliver of health is regenerated between each stage. Players can also test their skills against a worldwide audience with the online multiplayer. While the competitive UNIEL fans can participate in Ranked Matches and track their win-loss ratios and progress on the world leaderboard, Player Matches can be hosted in public lobbies for up to 8 participants. By participating in any of the available modes, players will earn points for purchasing artwork, extra color palettes for each character, and more options for customizing their online profiles.

Unlike the recent Aksys and Arc System Works Fighters released in North America, UNIEL is a “grounded” Fighter. While franchises like Guilty Gear and BlazBlue feature air-to-air combat, most of the action in Under Night In-Birth Exe:Late is tethered to the ground. Though most of the characters are equipped with “launchers” (i.e. Mortal Kombat‘s uppercut) and unique air abilities, only a select few are actually capable of linking multiple in-air attacks. Akatsuki, Eltnum and Hyde are among those with anti-air attacks and damage-inducing launchers, but these are often reserved for countering. Similar gameplay styles can be found within Arcana Heart 3: LOVE MAX!!!!!!, Street Fighter or KOF XIII.

A major highlight of UNIEL‘s gameplay lies within it’s GRD “Grind Grid” mechanic. Under Night In-Birth Exe:Late features both a normal special meter- the “EXS” gauge- and a pseudo-shared meter in the bottom-center of the screen, known as the Grind Grid, or GRD. Reminiscent of Guilty Gear‘s Tension gauge, the GRD meter rewards the player for being more aggressive in matches; if the player is dashing forward and always trying to pressure his or her opponent, the GRD gauge will increase. However the GRD will decrease if the player takes damage, has his or her attacks blocked, or after back-dashing. Unlike EXS, the GRD meter can be charged by holding whichever button is mapped to “D”. A ring at the center of the gauge will automatically fill as the match progresses; when the ring is complete, the player with more blocks in their GRD meter will enter the Vorpal State, granting a 10% damage-boost and the ability to cancel attacks or fill a portion of the EXS gauge by double-tapping the D-button. Training Mode is present for players to practice these mechanics, but the GRD system is never actually explained elsewhere.

As it was technically available in 2012- two years prior to the release of Dengeki Bunko Fighting Climax– Under Night In-Birth and its update are the first titles from Ecole Software and French Bread to feature high-definition sprites. UNIEL‘s anime-inspired cast features a wide array of detailed, unique characters; Yuzuriha is a casually-dressed, incredibly skilled swordswoman who chooses to spend her time lazing around; Waldstein is a hulking brute with massive steel claws that barely fit on the screen; the classy Hilda sports an elegant dress split perfectly between black and white with an “infinity” buckle; Merkava is a primal beast, designed with a hint of twisted grace behind his long frame. While North American audiences may not be familiar with either one, two cross-over characters are included in the roster; Eltnum is an older, aggressively “self-aware” version of Melty Blood protagonist “Sion Eltnam Atlasia“; Akatsuki of the 2007 PC fighting game Akatsuki Blitzkampf finds himself within the world of UNIEL after waking from an extended sleep. 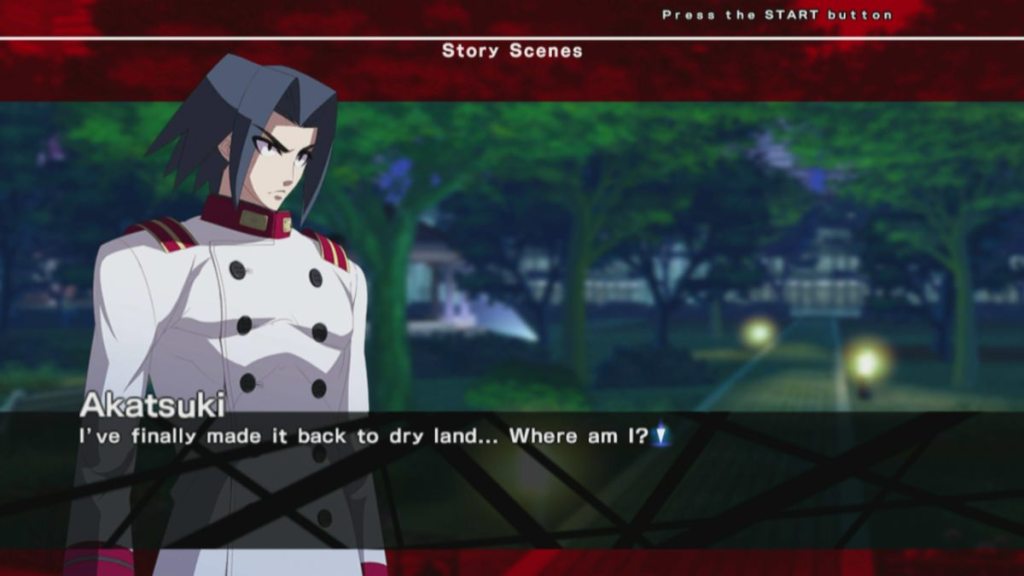 Under Night In-Birth Exe:Late is a competent fighting game, except it’s held back from its own inability to convey information to the player. Continuity issues, cryptic character descriptions that are only displayed for brief moments, and surprise terminology, all fail to deliver a functional story, let alone establish a concrete stage for UNIEL‘s events. The gameplay mechanics are familiar and accessible, with the GRD system bringing an extra level of competition into each match, except that the GRD functions are never touched-upon within the game. The same can be said regarding some of the more complex functions within the Street Fighter franchise, however Capcom’s popular fighing game saga has over 25 years of experience, where Under Night In-Birth is the first in what may evolve into a new series.

Those looking for a fun, new Japanese fighting game without the complexity of other recent titles should consider trying Under Night In-Birth, but a fair amount of research is required in order to fully appreciate Ecole’s and French Bread’s new IP.