It only took 40 minutes for fans to successfully fund Yooka-Laylee, the spiritual successor to Banjo-Kazooie….and it only took 24 hours to meet all of the original stretch-goals.

Banjo-Kazooie is considered to be one of the hallmarks of the 3D-Platforming genre. The adventures of the bear-and-bird duo began on the Nintendo 64 with Banjo-Kazooie and its sequel Banjo-Tooie. While the third game never saw the light on the GameCube, two more games were released before Microsoft’s acquisition of Rare and its properties- Grunty’s Revenge and Banjo Pilot for the Game Boy Advance. The franchise returned in 2008 with the Xbox 360-exclusive Banjo-Kazooie: Nuts & Bolts. To this day, longtime fans of the series regard Nuts & Bolts as a travesty, as the game disregards its platforming roots, in exchange for gameplay revolving around building and racing vehicles. While various rumors about a new Banjo-Kazooie have been circulating around. especially after Conker’s surprise appearance during E3 2014. a new game has not been confirmed to be in development. However, both of the original N64 titles are available in HD through XBLA.

In late 2014, several of the original Banjo-Kazooie developers revealed they had come together to form Playtonic Games, with the goal of resurrecting the “buddy-duo platformer”. The result of their labor is Yooka-Laylee, a spiritual successor to Banjo-Kazooie, from the original team behind the series. Yooka-Laylee swaps the original bear-and-bird duo with a chameleon (Yooka) and a bat (Laylee), each with his or her own unique abilities; Laylee can use her sonar blast against enemies, while Laylee can swing across environments using his tongue as a grapple-hook. Of course, the two are also capable of combined moves, such as Yooka flying around while she carries Laylee.

A term that was coined shortly after Banjo-Kazooie, and later taken to the extreme with Donkey Kong 64, Yooka-Laylee will also be a “collectathon” with many items and trinkets hidden within each world for the player to find. Unlike its spiritual predecessors, Yooka-Laylee‘s collectibles can be spent towards increasing the size and playable areas of each world. Players can also find “Play Tonics” that modify the difficulty on-the-fly, and change the stats of both Yooka and Laylee.

Again, Playtonic features the talents of several former Rare developers, including those who’ve worked on such titles as the Donkey Kong Country series, Kameo: Elements of Power, and the original Banjo-Kazooie N64 titles. Some of the highlighted talents working on Yooka-Laylee include Steve Mayles (created the DKC characters, Banjo and Kazooie), Chris Sutherland (Lead Programmer for both Banjo Kazooie and DKC), Jens Restemeier (programmer for Perfect Dark Zero and Jetpac Refuelled), and Mark Stevenson (Lead Artist for Kameo and DK64). Legendary Rare Composer Grant Kirkhope will also return to develop the music of Yooka-Laylee.

While Playtonic Games was originally asking for £175,000 to finish Yooka-Laylee, passionate fans successfully funded the project just 40 minutes after the campaign began. In just 24 hours, the Kickstarter has raised more than £1,110,000/$1,680,373, and is continuing to climb. All of the original stretch-goals have been met; Yooka-Laylee will now have additional bosses, extra throwback mine-cart levels, a pre-final boss quiz, extra language support for localization, 4 additional games within the multiplayer mode, and a local co-op mode.

With the £1,000,000 stretch-goal clearly funded, Yooka-Laylee will have a simultaneous release on PS4, Xbox One, Wii U, PC, Mac and Linux.

Two more stretch-goals have been added to the Kickstarter campaign, featuring a Nintendo 64-inspired “shader” graphics option, a “GK Rap” video produced by Grant Kirkhope, and a “Let’s Play(Tonic)!” developer walkthrough and commentary provided by Playtonic.

Some of the higher contribution tiers are already sold-out, however those interested in obtaining a future copy of Yooka-Laylee can pledge £10/$15 for a PC copy (will be distributed via Steam). £15/$24 for a digital copy on console, or £20/$32 for both a console and PC copy, along with a pre-release Toybox PC demo; Toybox contains several assets of Yooka-Laylee, allowing players to experience the gameplay mechanics before the full game is released.

The Kickstarter campaign for Yooka-Laylee closes on 6/16; the projected release window for all versions (PS4, Xbox One, Wii U, PC, Mac, Linux) is scheduled for October 2016. 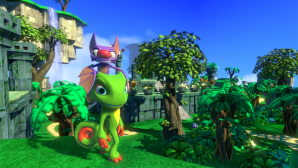 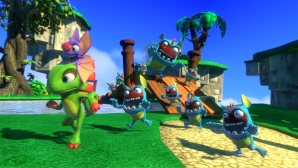 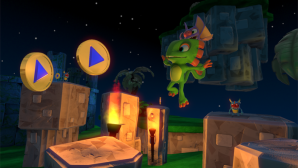 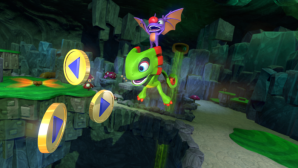