Depending on the retailer, the second Guilty Gear Xrd collectible statue is expected to release sometime between now and November.

Lucky Guilty Gear fans and memorabilia collectors may have been fortunate enough to get their hands on a Sol Badguy statue from Embrace Japan earlier this year. The statue released back in February, however some Japanese retailers still have some in-stock and ready to ship. Another marque character from the Guilty Gear franchise is getting his own collectible statue this Fall from Embrace Japan- Ky Kiske.

Former member of the Holy Order and one of the Kings of Illyria, Ky Kiske’s Guilty Gear Xrd -SIGN- version will be immortalized as a new collector statue, set to release sometime over the next few months; retailers are listing the statue’s release as anywhere from next week, to the end of November. At 24cm/9.4″ tall, the statue depicts Ky in his redesigned Holy Order uniform with sword drawn; an additional replacement head is included, featuring Ky with his hair down, as seen in-game after getting hit by a successful “cross-up” (i.e. an attack that lands behind the character’s head): 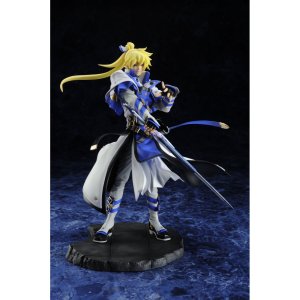 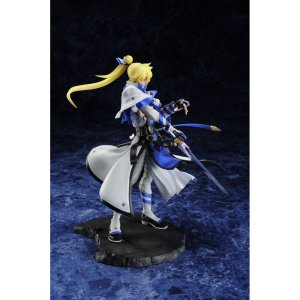 The Embrace Japan Guilty Gear Xrd -SIGN- Ky Kiske statue is available to pre-order through various outlets: Play-Asia, 1999 and Tokyo Otaku Mode all list the statue’s release as Sept. 2015, while MyFigureCollection.net and AmiAmi currently state the release as Nov. 2015; the statue can also be pre-ordered through Amazon, however this listing is the most expensive, at $263.55.