The original shipments of statues were dead-on-arrival, so Chronicle Collectibles is taking another go at their Mad Moxxi statue, now set to release sometime next year.

As previously reported, Texas-based collectible manufacturer Chronicle Collectibles was to release a statue based on Mad Moxxi’s DLC appearance from the original Borderlands. The $120 1/4 scale statue appeared in GameStop’s original Black Friday ad, and would have been a retail-exclusive item. While Chronicle themselves never released an official statement through any of their outlets, several GameStop managers nationwide took to social media to report that 1,000’s of Mad Moxxi statues were arriving broken; some of them had broken limbs or had been decapitated, while others were completely shattered.

Chronicle Collectibles is now working on a new Mad Moxxi statue to replace the previous one, this time with her purple jacket from Borderlands 2. Akin to the previous version, the new collectible will be 1/4 scale, featuring the same pose as before with Moxxi kneeling on a platform inspired by the Penalty Box from “Mad Moxxi’s Underdome Riot“: 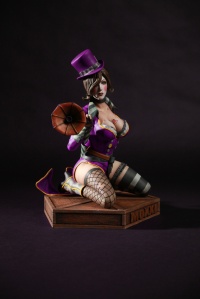 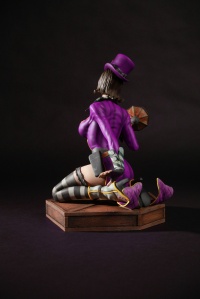 An official release date has not been confirmed, however GameStop currently lists the Chronicle Collectibles Mad Moxxi statue with a tentative date of 5/31/2016; this suggests that the item will release in late Spring/early Summer 2016.

The statue can be pre-ordered through GameStop online for the full price of $119.99, or in-store for a minimum down payment of $25.