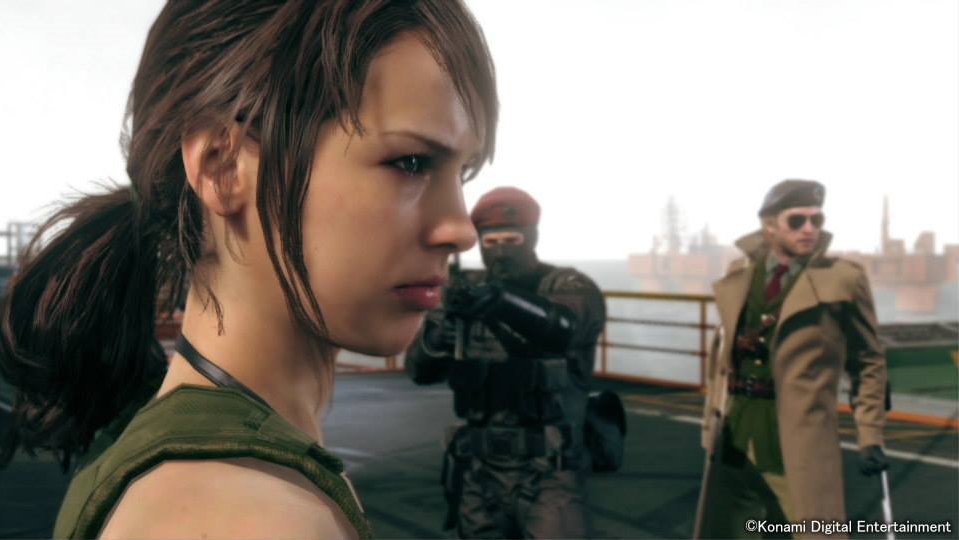 During the early hours of TGS 2014, Hideo Kojima and members of Kojima Productions took to the stage to showcase a 20 minute gameplay demo for the upcoming tactical espionage epic, Metal Gear Solid V: The Phantom Pain.

Metal Gear Solid V was cryptically revealed between E3 2012 and the 2012 Spike TV Video Game Awards: Hideo Kojima presented fans with a new trailer for Metal Gear Solid: Ground Zeroes at E3 2012. The new open-world take on the espionage franchise would showcase the visual power of the brand new Fox Engine, along with the reveal of Keifer Sutherland taking over for the voice of Snake. A new trailer surfaced from the previously unheard-of Moby Dick Studio during VGA 2013. Simply titled “The Phantom Pain” (with strategically-placed “missing” segments in the title graphic), this dark and somewhat disturbing cinematic dragged viewers through an emergency room under fire; patients and doctors alike fell at the hands of armed soldiers and the supernatural. The following year, not only was it was revealed that The Phantom Pain was in fact a Metal Gear Solid title, but that both The Phantom Pain and Ground Zeroes were two parts of the upcoming epic, Metal Gear Solid V. Due to delays and developmental hurdles, the decision was made to release MGS V as two separate games– MGS V: Ground Zeroes (currently available) and the much larger MGS V: The Phantom Pain.

During the opening hours of Tokyo Game Show 2014, Kojima led a 20 minute gameplay presentation for MGS V: The Phantom Pain. Over the course of the demonstration, several new gameplay elements not present within Ground Zeroes were shown, along with a brief introduction to the mute supernatural sniper, Quiet. As shown in previous trailers, Snake is able to traverse the vast open terrain not just in vehicles, but also on horseback. The horse can be summoned with a whistle, and much like everything else, can be whisked away via balloon: Snake can attach powerful balloons onto knocked-out enemies and some objects, to either send them back to base, or to “hide” them from sight. (Soldiers will react accordingly when they come across fallen comrades.) Along with the stealth mechanics found in Metal Gear Solid V: Ground Zeroes, Snake is also capable of hiding from enemy sight when rock-climbing. A new Decoy has been added, which inflates a life-sized Snake balloon when it hits the ground; if thrown towards an enemy, the Decoy acts as a small-area explosion, sending nearby soldiers flying.

The mute sniper Quiet was shown in gameplay form for the first time, demonstrating her supernatural abilities to phase in-and-out of existence, survive long drops, and move with incredible speed. Quiet can be called in at any time to aid Snake on the ground; the sniper will drop in, scout ahead and tag any unseen targets, and provide cover-fire when necessary. As the demo was presented entirely in Japanese, it’s unclear whether or not Quiet will be strictly AI, or fall into the multiplayer aspect as a co-op player. Snake’s prosthetic arm is shown as having another purpose, as it can be charged for a stun attack.

Quiet was also shown in a stand-alone cut-scene revealed earlier today. Kojima and the character were originally under fire for the sniper’s provocative attire– or lack thereof; Kojima and Art Director Yoji Shinkawa stated via Twitter that “sexualizing” characters raises the chance of collectible figurine production, cosplay and other marketing opportunities. Several new screenshots from the above trailer were released via the official Facebook page.