The upcoming console release of Guilty Gear Xrd -REVELATOR- will have an additional brand-new fifth DLC character for the roster.

The sequel to Guilty Gear Xrd -SIGN-, Guilty Gear Xrd -REVELATOR- released in Japanese arcades last year, with a console port coming to both Japan and North America this Spring. Not only does the second chapter of the 3D installment feature an extended new Story Mode and plenty of updated mechanics, but Xrd -REVELATOR- will include five additional characters; fan-favorites Johnny, Jam Kuradoberi and Dizzy will return, along with new villain Jack-O.

Arc System Works announced through Japanese gaming magazine Famitsu that a fifth character would be available for the console versions as DLC. Newcomer “Kum Haehyun” will be available for free within first-print copies of -REVELATOR-; the character can be purchased alternatively through PSN. While Kum Haehyun isn’t playable in the current build of the game, “he” appears during a cutscene within Leo Whitefang’s Arcade Mode. A descendant of the “mind tuners” and current leader of the Kum family, Kum Haehyun is actually a woman controlling a suit modeled after a buff middle-aged man. The Famitsu scan suggests that Haehyun will have fairly simplistic mechanics that weigh heavily on power and momentum. 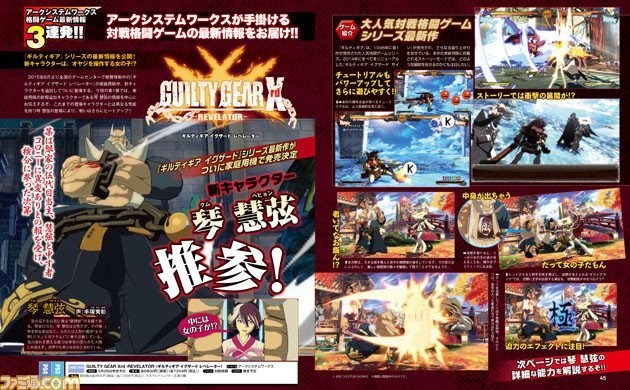 Guilty Gear Xrd -REVELATOR- will release for the PS3 and PS4 in Japan on 5/26; a North American release date has not been scheduled, however it should be noted that the NA version of -SIGN- released just weeks after its Japanese counterpart. Kum Haehyun will be available as a free DLC character for pre-orders and first-print copies.