For the ultimate Batman fan with expendable income, Prime1 Studio recently unveiled a $1,600 statue of the Arkham Knight Batmobile.

Prime 1 Studio may not necessarily cater to entry-level or casual collectors, but those who are willing to forfeit a few paychecks may get their hands on some of the most detailed collectible statues on the market. Prime 1’s library of premium museum-quality collectibles include the likes of Optimus Prime and Megatron from the Michael Bay “Transformers” films, Zack Snyder’s Batman and Superman from “Batman V Superman: Dawn of Justice”.

Following their Arkham Knight Noel Batman, Arkham Knight/Red Hood and Harley Quinn statues, Prime 1 Studio is now offering a massive statue based on the title’s variation of the Batmobile. Inspired by the “Dark Knight” trilogy’s Tumbler, the Batmobile seen in Arkham Knight is closer to a tank than a stylized roadster; Batman’s new ride can fire a winch powerful enough to pull the Batmobile across vertical surfaces, be controlled remotely, and even transform into a tank with four-wheel-steering.

The massive Batmobile “diorama” from Prime 1’s Museum Master Line is both hand-painted and sculpted from polystone. At 1/10th scale, the collectible measures at 34.9cm/13.7in tall with a length of 65.8cm/25.9in, at 48cm/18.9in wide. The statue also features LED remote-controlled accents. 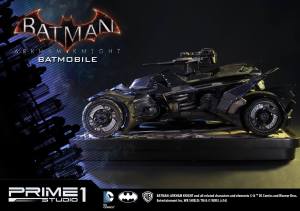 The Batman: Arkham Knight Batmobile from Prime 1 Studio can be pre-ordered through Prime 1 and Sideshow Collectibles for a whopping $1,599 either in-full or through monthly payments; only 500 collectibles will be available for purchase.

Units are expected to begin shipping in Q1 2017.