New screenshots show the  return of another classic character for the Story Mode of Guilty Gear Xrd -REVELATOR-.

Japanese gaming magazine Famitsu holds the latest sneak peek at the console versions of Guilty Gear Xrd -REVELATOR-. Akin to 2014’s Guilty Gear Xrd -SIGN-, the sequel launched in Japanese arcades last August, with PS3 and PS4 versions scheduled to arrive in just a few months. Both console versions will include exclusive DLC characters, and an extensive Story Mode potentially in the form of yet another visual novel.

Picking up shortly after the events of -SIGN-, the plot in Guilty Gear Xrd -REVELATOR- involves preventing the return of Justice, and the history of “That Man”. Sol Badguy’s (still “Frederick” at the time) partner in the scientific research of magic, “That Man” is the enigmatic man behind the creation of the magical “Gears” species, and the destructive war that followed; “That Man’s” actions also led to the death of Sol’s love interest- Aria- whose fragmented persona lives on through Justice, Valentine, Ramlethal, Elphelt and Jack-O.

“That Man”, Elphelt, Dr. Paradigm, and newcomers Jack-O and Raven are shown below; accompanying Dr. Paradigm in the middle image is the newly redesigned Zappa; the character previously appeared in Guilty Gear XX Accent Core Plus R as a fighter possessed by S-Ko and other spirits. 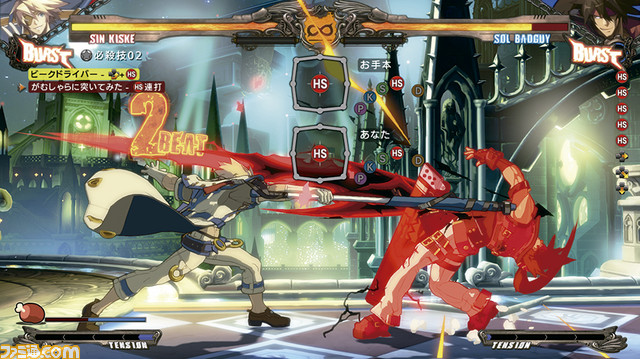 Guilty Gear Xrd -REVELATOR- will release for PS3 and PS4 on 5/26 in Japan, with the North American and European versions arriving on 6/7 and 6/10 respectively.