The highly anticipated Senran Kagura is finally available in North America, but is this a beat-em-up worth checking out, or is it nothing more than perverse eye-candy?

The “Senran Kagura” franchise has been very successful in Japan, spawning both an anime and manga series and a few PSP/Vita spin-offs; the series also has a cult following within the US. After several delays, Senran Kagura is finally available in North America as a digital 3DS title- Senran Kagura Burst.

Senran Kagura Burst is a localized version of the first 3DS title from Japan, along with some extra content exclusive to the North American version: Burst is broken up into two interwoven stories; “Skirting Shadows” follows the plot from the point-of-view of the Hanzō Academy, while the new “Crimson Girls” mode gives an alternate side of the story from the view of the Hebijo Clandestine Girls’ Academy. It’s recommended that players new to the series should begin with “Skirting Shadows”, as “Crimson Girls” contains several details that may spoil major points later in the plot: Players will take hold of five students from one of the shinobi-training academies, and guide them through training exercises and outside encounters with thugs, gangs and rival ninjas; during both schools’ training, students from Hebijo Academy attack Hanzō in order to steal and acquire the power of the “Light Super-Secret Ninja Scroll”, which results in a [reluctant] war between the rival schools. While the basic plot is fairly simplistic- “Rival schools, important artifact is stolen, chaos”- Burst excels in its character-development: Throughout the course of both campaigns, each set of five students will face their own individual trials that test their emotional and mental beliefs and conditions; every character has personal motivations that not only define their personalities, but change their actions through the course of the game. Despite being an action-game, Senran Kagura‘s character development may not appeal to impatient gamers, as it is often presented through several “walls of text” and animated character conversations; players have the option to fast-forward through these moments- at the cost of missing large details that define each character and his/her past.

A quick glance at Burst would probably give the impression of this being a very lewd, perverse title……Yes……Underneath this, lies a strangely addictive side-scrolling beat-em-up, which there aren’t very many of for the 3DS. Gameplay usually consists of defeating all enemies within a closed area, then progressing into the next segment of a stage until the level is complete; other stages include time-limits, an item that can only be recovered from defeating a specific enemy, and one-on-one Boss encounters. Each Chapter contains both Story Missions (marked with a “key” icon) and Side Missions; Story Missions are usually character-specific and will progress the plot- completing all Story Missions within a Chapter will unlock the next Chapter; completing Story Missions will also unlock Side Missions, which can be played with any of the five students and will unlock extra customization items, and help in leveling-up each character. Between each Mission, players are returned to the Academy lobby, where they can switch between playable students, manually save their data, select from a variety of unlocked outfits and accessories, check character-stats and progress, and view unlocked movies and artwork. 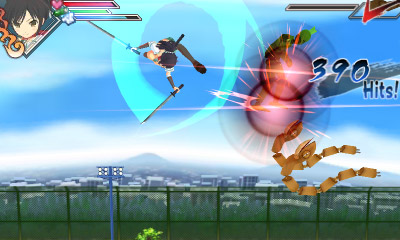 As fair warning- and a quick Google search will confirm this- Senran Kagura Burst has some rather perverse elements worked into the overall systems of the title. It’s impossible to ignore the idea that “3D-breasts” were a huge selling-point for the game; when the students take a certain amount of damage, or are on the receiving end of a special-attack, her clothing is incrimently destroyed; at the start of each Mission, players have the option of activating “Frantic” mode- the character will shed her clothes (she fights in a bikini) and her attack-power will increase, at the cost of her defenses; during “Shinobi Transformation” sequences, players are also shown some rather gratuitous fan-service angles of their character between the change from one outfit to another…

…While Frantic and Shinobi Transformation modes provide an extra layer of “risk-reward” gameplay, it also makes for a somewhat awkward overall experience.

The Nintendo 3DS lacks a wide variety of beat-em-up titles, but Senran Kagura Burst does its part to shorten that gap. While the overall experience might come off as awkward- and probably shouldn’t be played in public view- Burst has an arsenal of traits to offer, with plenty of replay value, several unlockable items, dynamic characters equipped with their own individual play-styles. Behind the bizarrely physics-defying breasts of Senran Kagura Burst lies a fun, addicting, and solid beat-em-up title that the 3DS has been lacking for quite some time.